I’ve been banging on the “Hey, let’s model effective match time!” drum for a few posts now, and I’m ready to move on to something else, but I want to present one more extension. You can read some of my previous work in the Match Quality Metrics category of the blog.

I want to answer this question: Does the identity of the match referee have any impact on the amount of effective time in a match?  The answer to that question holds much interest to the football community, from football fans and club officials to the media and the league organizations.  The officials with the league office would prefer (and assert) that their referees have no impact on the pace of play; perhaps fans and club officials would believe differently, especially in the case of match referees they hold under suspicion.

To assist in answering this question, I create a model of effective playing time that accounts for the identity of the opposing teams and the match referee.  It is:

I used data from the 2010-11 English Premier League and the details for fitting the model are similar to previous studies.  You can read the technical information in this post (and this post, too) if you want to learn more.

My expectation is that very few of the match referees would influence the effective time in a significant way; in other words, their respective regression coefficients would not be significantly different from zero.  The team influences on effective time would be relatively unchanged.

The regression results showed that knowledge of the two participating teams and the match referee in a Premier League match influenced 20-40% of the variation in the effective match time. (This is the standard R² value that we are referring to.)  Much more interesting is the adjusted R² value, which compares the predictive quality of models with different sets of regressors.  This value decreased when referee identity was added to the model.  That’s not very reassuring about the predictive quality of the updated model. (I know that I need to insert a figure to illustrate this point, and I’ll do so later.)

The coefficients associated with the Premier League teams were for the most part similar to those generated for the original regression model.  Table 1 displays the mean values of the coefficients and their standard errors, and Figure 1 illustrates them.  Manchester United had the greatest positive impact on effective time in 2010-11 — three to four more minutes than the average League match, and even after controlling for referee identity the magnitude is not significantly different from that from the previous model.  Stoke City had the greatest negative impact on effective time — three to four fewer minutes than the average League match.  The magnitude of each team’s influence on effective time didn’t change much when referee identity is added, with the exception of Everton, whose influence became akin to that of Stoke or Bolton. 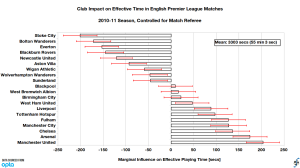 The referee influence coefficients show that the large majority had — on average — no significant influence on a League match in 2010-11.  In matches the amount of effective time can be greater or less than average due to other factors, such as the frequency of stoppages and fouls, the match tempo of the two teams, or weather conditions.

This study covers only one season in one competition, so one needs to be careful with any conclusions drawn. It is fascinating that knowledge of the two competing teams can predict effective match time with a fair degree of predictive power.  It is also fascinating how well a team’s influence on effective time relative to the league average correlates with other quantities such as match tempo or passes per possession.  Yet the influence of match referees on the amount of playing time is inconsistent, even for those referees in charge of a higher proportion of matches.  So to return to our motivating question, “Does the identity of the match referee have any impact on the amount of effective time in a match?”, the answer would have to be “No, not in this case.”  I imagine that the league office would like that.