In my previous post on the subject I applied the mean centering technique to the regression that I ran on effective time data in the 2010-11 English Premier League.  I’ve been working with J-League data from this recently concluded season, so let’s refine that analysis for completeness sake.

If you’re just joining us, the regression analysis is explained in this post and the previously linked post.  The objective is to identify the impact that each club in Division 1 (J1) and Division 2 (J2) has on the effective playing time in League matches relative to the average match in their respective divisions.  Just knowing which teams are participating in a J-League match explains between 30-40% of the variation in effective match time.  In J1 matches that figure is closer to 40%; in J2 it is closer to 30%.

Figure 1 shows how the team impacts look for clubs in J1.  Sanfrecce Hiroshima, the champions, accounted for an increase of about five minutes of playing time (relative to the average match) in their matches.  Yokohama F-Marinos, the league runners-up, were on the opposite end of the scale; their presence in a match accounted for a reduction in playing time by almost four minutes relative to the average match.  For a plurality of the clubs in J1, their relative impact on effective playing time was a wash. 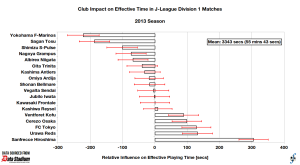 Figure 2 displays similar results for clubs in J2.  As it happened the three promoted sides in the competition — Gamba Osaka, Vissel Kobe, and Tokushima Vortis — had very positive impacts on effective time, from 100 seconds to a little over six minutes relative to a typical J2 match.  A majority of the teams had a negative impact on effective time, culminating in sides like V-Varen Nagasaki and Montedio Yamagata which tended to reduce effective time by as much as three minutes relative to the average. 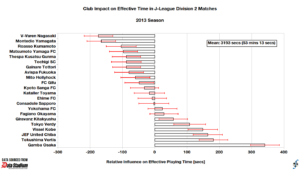 I didn’t have access to more detailed data for the J-League, but it would be interesting to use them in order to study the effect of possession and match tempo on these influence measures.