I’ve started the last two or three years with an analysis of effective time in the J-League, but this year I started differently because of the Joint Mathematics Meetings.  With the JMM in the rear view mirror I’ve returned to looking at the J-League, repeating the Bayesian analysis that I conducted last year.

This analysis is performed on data collected as part of an initiative by the J-League called Plus Quality, which attempts to assess and improve the quality of their on-field product, from increasing playing time to decreasing time lost due to negative events.  Plus Quality started in 2013 and involves all league matches in the J-League’s three divisions as well as the League Cup competition.

Here’s some summary statistics and information on effective playing time in the 2016 season:

The objective of the effective time analysis is to identify the impact of clubs on the effective playing time relative to an average match.  I expect that teams are associated with playing styles and behaviors that either increase or reduce the amount of time that the ball is in play.  Is it crude?  Yes.  Does it provide some insight nonetheless?  Maybe.  But sometimes simplistic analyses are useful by prompting follow-on questions that motivate more sophisticated analysis.  At any rate, a description of the Bayesian analysis is in last year’s post.

A plot of club impacts on effective playing time is shown below.  The dot in the middle of the bar represents the median value of the club impact, and the lines extending from it represent the 95% credible interval.  For the third season in a row, the presence of Sanfrecce Hiroshima in a J1 match adds between 4.5 and 7 minutes of effective playing time.  At the bottom of the list, Shonan Bellmare’s presence in J1 matches reduced the amount of playing time by one to four minutes.

I would have expected to see more movement of teams up and down the impact list as personnel and coaching staffs change, but it’s been most interesting to observe how often clubs such as Sanfrecce, Frontale, Marinos and Gamba remain at the top of the list.  This season those four sides were the only ones almost certain to have positive impact on effective playing time in their matches. The three relegated sides — Nagoya Grampus, Avispa Fukuoka, and Shonan Bellmare — are among the six sides with negative impact of effective playing time.

Overall, it appears that clubs have a slightly more positive impact on the amount of playing time in the 2016 season than the previous season. 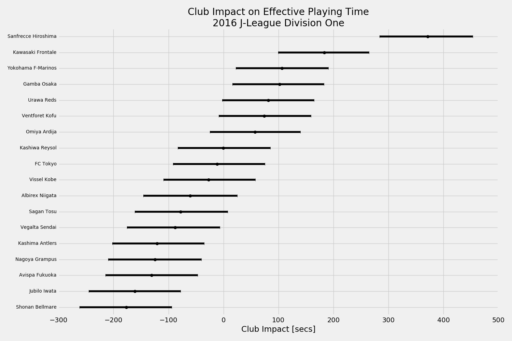