I started off 2015 with an analysis of effective time in the J-League and which teams appeared to have a strong influence on it.  To start off 2016 I do the same type of analysis but from a Bayesian perspective.  My objective for 2016 is to take my analytics into more of a Bayesian direction — present not only point estimates but also uncertainties and probabilities in a more systematic way.

These data are collected as part of an initiative by the J-League called Plus Quality, which attempts to assess and improve the quality of their on-field product, from increasing playing time to decreasing time lost due to negative events.  Plus Quality started in 2013 and involves all league matches in the J-League’s three divisions, plus the League Cup matches.

Here’s some summary data on effective playing time in the 2015 season:

The goal of this and previous analyses has been to identify the impact of clubs on the effective playing time relative to an average match.  The idea is that some teams are associated with playing styles and behaviors that either increase or reduce the amount of time that the ball is in play.  It’s a crude model to be sure, but one that describes the differences between certain teams. 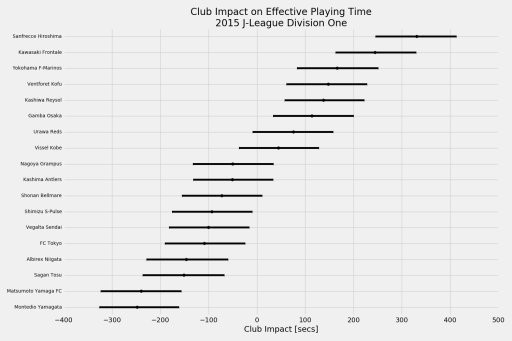 I’ve added the J-League effective playing time data to the ProjectData repository on GitHub, and I’ve also included an iPython notebook of the Bayesian analysis so that you can check my work and perhaps extend it.

Here’s where I define the Bayesian regression model.  There’s math involved, so if you don’t want to see it, feel free to move along.

The Bayesian regression model is similar to the classic (frequentist) model in that you have an equation like this:

Here, \(\beta\) represent the parameters, \(X\) the predictors, and \(\epsilon\) the unmodeled error.  The difference is that the data \(y\) is assumed to be drawn from a normal process and the parameters have prior probability distributions associated with them:

In the case of effective playing time, the regression model is:

The priors of the parameters are defined:

where \(\bar{T}_{ij}\) is the average effective match time over all league matches.