Last night, I tweeted a teaser for this post that said that the median effective playing time in Argentina’s Primera División matches is in the vicinity of 48 minutes, which is very low for a domestic football competition:

The reality is that my calculated estimate is closer to 50 minutes than 48, which doesn’t sound like much but is actually a 4% difference, which is a big enough difference for me.

In most cases, I can calculate the exact effective playing time from match event data if ball out events — those events that prompt a restart with a throw-in — are properly recorded.  Unfortunately, DataFactory does not record such events, so I have to estimate the amount of time lost from the number of throw-ins made.  (This is not a knock on DataFactory; their data set is for a different market than other data suppliers.)  The uncertainty range in the regression coefficients defines the minimum and maximum ranges of time lost.  This post from 2014 explains the estimation procedure as applied to the World Cup.

What has made the effective time calculations even more complicated for Primera División Argentina 2016-17 is that for several matches, no throw-in events were recorded in a single period by DataFactory.  This meant among other things that no time was lost due to throw-ins which also meant that the resulting effective time for those matches was close to 75 or 80 minutes.  The lack of throw-ins in a match is something that I find highly unlikely, so these matches have been excluded from the data set.  For those of you wondering, these matches are:

There are other matches with less than 10 throw-ins in a single period, but I’ve decided to keep these matches in the data set. 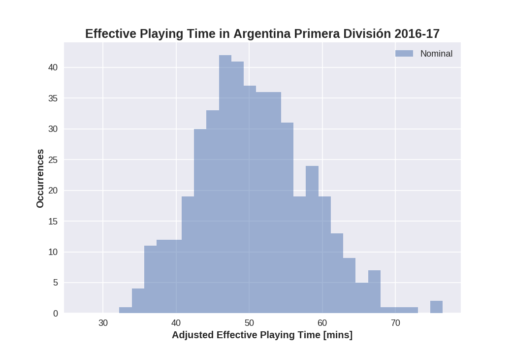 Here is how the upper and lower bound estimates of effective time look: 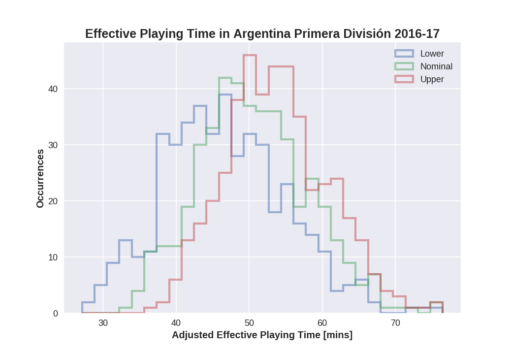 In a future post, I’ll look at the sources of playing time lost and the effects of the teams on the differences in effective playing time.