You are here: Home › Referee Performance › A final look at referee performance in Argentina Primera División 2016-17

At the midpoint of the 2016-17 Argentine Primera División season, I conducted an analysis of the refereeing performance in the competition that focused more on match management — time added on, time between stoppages, and effective time.  At the conclusion of the season, I return to this analysis and include a few metrics that the sports media tend to focus on when they discuss match referees.

This season’s competition used a total of 28 referees to officiate the 450 league matches.  Half of them worked more than 20 matches, eight worked less than 10, and three referees were called up for a single match in Primera.  All of the referees who officiated more than 20 matches are international referees (Federico Beligoy is a former FIFA referee).  Most of the referees who have worked less than 10 are either young referees from lower divisions who are being blooded in Primera or older referees on their way out (Saul Laverni, an ex-FIFA referee, worked his last match in November). 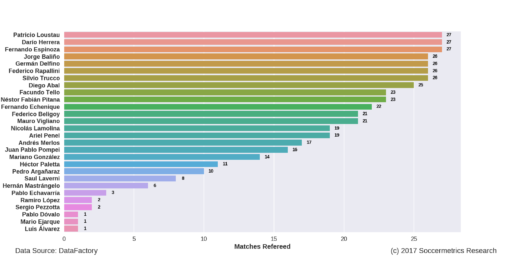 On average, Primera División matches in Argentina see about five yellow cards with penalties and red cards shown about once every four matches.  Among the referees in the international pool, Federico Rapallini tends to show yellow cards at a higher rate than his peers, Patricio Loustau shows more reds, and Jorge Baliño and Diego Abal award more penalties.  It’s worth noticing that Ariel Penel gave penalty kicks at a much higher rate than any other referee in Primera.  It appears that he’s self-conscious of that fact as he has stated after multiple matches that he failed to give penalties for plays that probably deserved them.

Yellow cards, red cards, and penalties given by referees in matches of the 2016-17 Argentina Primera División. Data supplied by DataFactory LatAm.

Putting aside the referees who don’t have as many appearances, match referees in Argentina tend to add the same amount of time at the ends of each half.  They add about two minutes at the end of the first half, and three to four minutes at the end of the second.  I have the data so it would be interesting to know the effect of match state on the amount of stoppage time (which would replicate a few studies found here and here).

Stoppage time added by referees at the end of first and second halves in 2016-17 Argentina Primera División. Data supplied by DataFactory LatAm.

Mean time between fouls depends as much upon the two teams involved as the referee, but it can serve as a proxy for how tightly or loosely a referee is officiating a match.  I find it interesting that for the established referees the MTBF is in the neighborhood of 200 seconds and remains stable (within 15-20 seconds) between halves.  You see more variation among the less experienced referees, but then there is the case of Laverni, which could be the result of a small sample size but is still worrying (he’s retired anyway).

Mean time between stoppages is lower — there are a lot of events that will stop a football match — and exhibits much lower variance between halves.  Even among the referees whose matches have a higher MTBS, such as Penel and Laverni, the variation between halves is within 2-3 seconds.

Effective playing time is more of a function of the two teams and less that of the referee, but I’m including this chart anyway.  The nominally adjusted values for effective playing time (and I explain why I had to adjust DataFactory data here) stay within that 48-53 minute band, with a 2-3 minute variation for specific referees.  Matches involving Sergio Pezzotta had extremely wide variations in effective time — what was going on there? 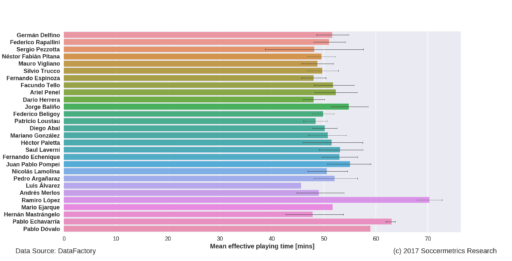 So there you have it — this Primera División season sees disciplinary cards and penalty kicks at a higher rate than most domestic leagues, with a greater variation in stoppage time added and a shorter amount of effective playing time.  In some respects the referee performances in Argentina resemble those seen in Spain.  No matter what the management style of refereeing is, it is useful to be consistent, and consistently apply the Laws of the Game.