When I was evaluating last season’s league projections and creating this season’s with the Pythagorean expectation, I was reminded that I hadn’t really studied which pairs of goals scored and allowed result in a specific expected point total.  In a league competition, it’s possible to reach a point total in various ways, and the combination of goals scored and allowed doesn’t necessarily follow a straight line.

To visualize the Pythagorean points that resulted from a goals scored and allowed combination, I created a contour plot.  I considered a wide range of goals scored or allowed — from zero to 120 goals — to ensure that I would cover the theoretical range of league points.  Each plot assumes a certain number of matches in a league season, and point totals are for an average team in the league competition.  I suppose I could have used point averages from 0 to 3.0 in the contour levels, which would have reduced the plots to one, but in my opinion the contours are more understandable when they relate to numbers that people typically see in a league competition.

So here are the plots, starting with Pythagorean expectations for a 30-match league competition: 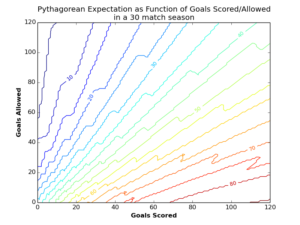 Next, a 38-match league competition: 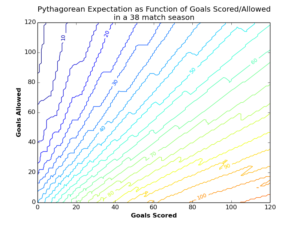 And finally, a 46-match league competition: 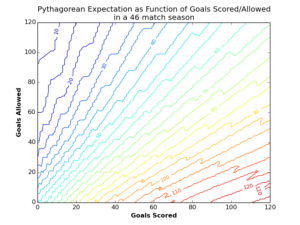 The thought didn’t occur to me until I started writing this post, but it would have been useful to overlay straight lines that indicate constant goal difference onto the contour plot.  I might go back and insert them in, but my curiosity has taken me far enough.