You are here: Home › Soccer Pythagorean: Tables › A Pythagorean view of the English Premier League with a month to go

After a month or three of collecting obscure data, rewriting database code, and making friends (heh), I’ve emerged to write some analytical content.  I haven’t come across in-match data from this season (yet), but I decided to start thinking about the Premier League season using one of my favorite high-level tools — the soccer Pythagorean.

If you’re new to the site and don’t know a thing about the soccer Pythagorean, check out the “Soccer Pythagorean Theory” category and look through the posts there.  I would start at this post and perhaps this one as well.  Essentially, it attempts to answer the question, “If we know how many goals an average team scored and allowed over a certain number of games, how many points is that team expected to win?”  From there we can consider the points an actual team with the same goal statistics won and determine the extent to which the team over- or under-performed relative to its expected performance.

So, I ran a Pythagorean expectation for this season’s English Premier League for matches played up to 19 April 2016.  This post is being written on a Thursday, but the analysis does not include results from matches played the previous day (Manchester United vs Crystal Palace, West Ham vs Watford, and Liverpool vs Everton).  The table looks something like this: 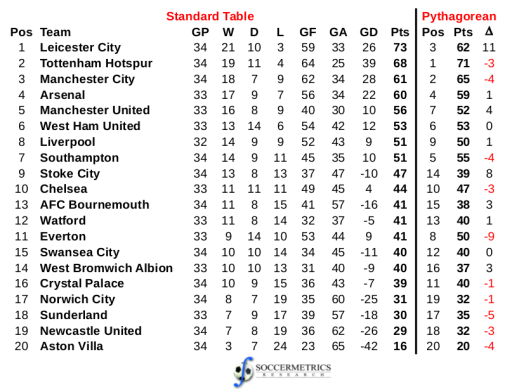 Standard and Pythagorean tables for 2015-16 English Premier League, matches played up to 19 April 2016.

There are several storylines that pop out from this table, but three stories are most prominent.  First, this is a down year for the traditional powers.  Second, Tottenham Hotspur should be running away with the league.  Third, Leicester City have overachieved tremendously with a helping of luck as well.  It’s not that they aren’t a Champions League-caliber side this season — they have the goal statistics to indicate that they would be competitive for a top-four finish, and other analysts such as Daniel Altman have made similar conclusions — but very few league leaders have overperformed to such an extent in the seven years that I’ve computed soccer Pythagorean tables.   Such teams include Manchester United in 2012-13 and FC Twente in 2009-10, and both had Pythagorean residuals of +11 or more.

You can also pick out the teams that appear to have significantly over- or underperformed over the season, such as Stoke City (+8) and Everton (-9).  Stoke and Bournemouth stand out because their goal statistics indicate that they should be involved in the relegation scrap, but they aren’t and will remain in the Premier League next season.  The bottom four teams in the standard and Pythagorean tables are the same, not necessarily in the same order, but they all deserve to be either condemned or fighting to avoid the drop.

Finally, if recent trends remain the same, the Premier League Manager of the Season should go to the manager of the team with the highest Pythagorean residual — Claudio Ranieri.

I’ve had a number of conversations outside of the blog with fans and league insiders, and I come across many who are reluctant to declare Leicester as likely champions.  I’m one of those people — it’s a fantastic story, perhaps the best football story of my lifetime, but it’s felt like Leicester have been defying gravity for so long.  The Pythagorean table appears to confirm that feeling, but I’d like to work with more detailed data to examine why.