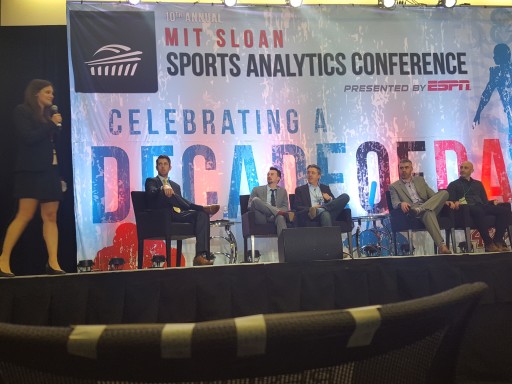 As I said Thursday night, I come to these conference panel discussions with low expectations.  With competitors and journalists in the audience, there is very little chance of hearing candid discussions by participants, with the exception of Mark Cuban.  I’ve had some time to collect my thoughts about yesterday’s Soccer Analytics panel, and my overall impression is that while the intent of the panel was good, the discussion didn’t flow very well in my opinion.

First of all, I strongly disliked the layout of the panel on the stage: 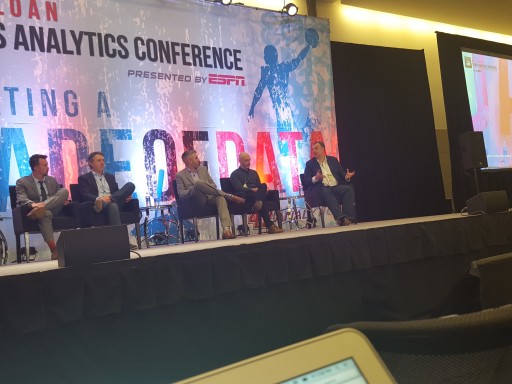 With an even number of panelists, the placement of the end tables would not have been an issue.  But with an odd number of panelists like this session, the tables had an effect of creating a literal odd man out in Gabriele Marcotti.  As a member of the audience, I felt that Marcotti was more or less a detached observer to the panel session.  When I look at my session notes, however, Marcotti was called upon about 20% less often than Pleuler, Anderson, and Wooster, yet Paul Carr was called upon even less often than him.

As for the discussion, the panel hit upon the following topics:

A significant amount of the conversation was devoted to expected goals models.  All of the panelists felt that it was an important metric that has gained wide appeal in the broader football public because of its relative simplicity of construction.  It also serves as a proxy for other unobservables such as over/underperformance of players and teams, and ultimately expected market value.  Some of the panelists expressed reservations with the model, in particular Pleuler who stated issues with bias, overvaluation of attacking play, and undervaluation of audacious plays (he gave Carli Lloyd’s goal from midfield in the Women’s World Cup final as an example).

There were other topics covered in the audience question period, such as Leicester City’s title run (Anderson: excellent recruitment policy, smart spending, a level-headed manager, a career season by Vardy, but perhaps a one-off phenomenon), long-term plans for club investment (Wooster: legal and financial matters not only important, but the playing squad also impacts value and is not easily quantified), analysis of attacking versus defensive play (Pleuler: not as simple as inverting attacking behaviors into defensive), and what’s next for the next 12 months (Marcotti: transparency in transfer system and club payments would have a huge impact of ability to value players/clubs accurately).

When I look back at the session, there was a lot more content than I recognized.  I think the session would have benefited from more spontaneous interaction between the panelists, but it seemed that everyone was sticking to their lanes.  Perhaps the presence of a true independent blogger who is knee-deep in analytics would be valuable for interacting with the other panelists (the Aaron Schatz effect).

So in summary, this year’s Soccer Analytics panel wasn’t a step down from last year, but it wasn’t a massive step up, either.