Last year I wrote a series of posts on effective playing time in the top two J-League divisions at the mid-season and end-of-season marks.  Further analysis of the numbers using an admittedly crude regression model indicated that some clubs have a significantly greater effect on the amount of playing time than others, for better or for worse.

For the last three seasons, the J-League has been implementing an initiative called Plus Quality that seeks to understand certain match quality metrics in order to inform policies that manage the flow of play in their matches.  It’s in line with the J-League’s broader goal of arresting the long-term decline in average match attendance and TV viewership.  (The recent decision to revert J-League Division 1 (J1) back to the two-stage competition with end-of-season playoffs has this broader goal in mind as well.)  This season the J-League, in conjunction with its data partner Data Stadium, continued to measure effective playing time but also time to restart after corner kicks, goal kicks, and substitutions.  This post will look at the restart time results across the J-League’s three divisions.

You can find PDF files that contain restart data on the J-League’s Plus Quality page.  It’s all in Japanese so I thought that it would be good to bring the major results to a wider audience.  To compile the restart data, Data Stadium examined the match scoreline at each substitution, goal kick, and corner kick event from the perspective of the team initiating the event and calculated the time from the start of the event to normal resumption of the match.  The total number of events and averaged time to restart are grouped according to the match state — winning, losing, or tied.

First, the figure that illustrates the average time to restart a match after a goal kick event: 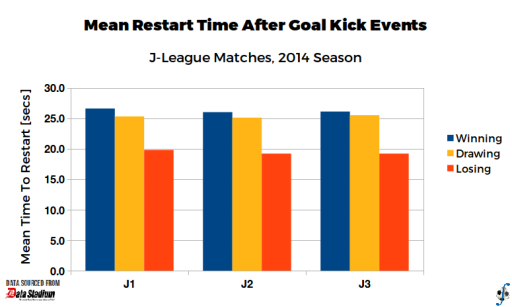 The next figure shows the average time to restart after a corner kick event: 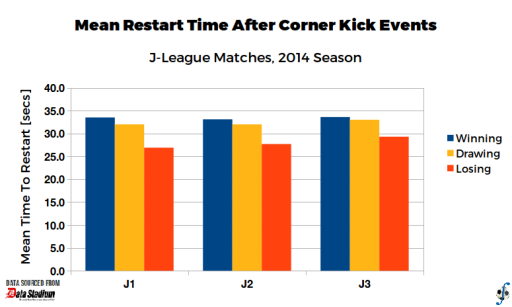 The third and final figure displays average time to restart after a substitution: 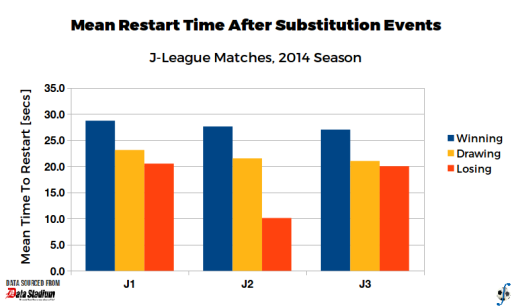 As you might expect, teams in the lead operate under a “go-slow” policy to restarting the match, and rush to restart quickly when they are trailing.  The effect is especially pronounced during player substitutions and goal kicks, yet remains similar across all three J-League divisions.  The major exception is time to restart after a substitution event by trailing Division Two (J2) sides when they are trailing.  Without additional contextual data it’s hard to propose reasons why, but that’s a result that should motivate a closer look.  The time to restart when a corner kick is given creeps upward by as much as five seconds from J1 to J3, particularly for a tied or trailing match.  Are higher-division players more disciplined about restarting as quickly as possible?  Maybe that’s worth a look as well.

The data is a good start, but it would be great to have data on the match times of these restart events.  I would expect to see some significant changes to restart behavior as a function of match time and match scoreline.  From the J-League’s perspective, it would be useful to understand how these results have changed over the last three or four seasons; fortunately, the data’s not that difficult to compile.