You are here: Home › Match Quality Metrics › Effective time in the J-League

Since last season the J-League has been publishing — through its data partner Datastadium — actual playing time statistics for every match in Divisions 1 and 2.  It’s part of a new initiative called +Quality (Plus Quality) which aims to improve the spectacle of matches for spectators by minimizing the events that annoy them, like time-wasting, or dissent, or unsporting behavior.  I used their data to do some quick visualizations, which I’ll show below.

The first is the effective time distribution for the 2013 J-League Division One, for matches played up to the 17th of July.  It’s halfway through the season and you can start to see the outlines of a normal distribution of the playing times.  The mean actual playing time in the league is 55 minutes 58 seconds, which is a little over 50 seconds more than the mean playing time in the Premier League a couple of seasons ago (I don’t have 2012-13 data, but I wouldn’t expect to see much change).  The match with the most effective playing time was Cerezo Osaka vs Vegalta Sendai (69 minutes 13 seconds), and the match with the least playing time was Shonan Bellmare vs Oita Trinita (42 minutes 10 seconds). 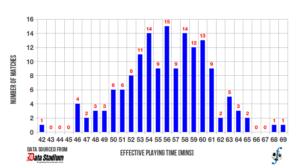 Distribution of effective playing time in J-League Division One, 2013 season, for matches played up to 17 July 2013.

The second is the effective time distribution for 2013 J-League Division Two, also for matches played up to the 17th of July.  The distribution is slightly skewed because of the greater concentration of matches with low effective playing times, but it may become more normal as the season progresses.  (Division Two plays 42 rounds and the season is about 60% complete.)  The mean playing time is 53 minutes 45 seconds, which is two minutes less than the playing time in J1.  Might there be an indication of differences in playing styles or quality?  The match with the most effective playing time in J2 is Gamba Osaka vs FC Gifu (64 minutes 23 seconds); the match with the least is Consadole Sapporo vs Roasso Kumamoto (41 minutes 26 seconds). 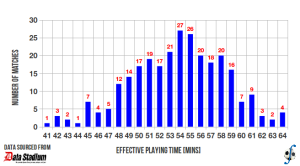 Distribution of effective playing time in J-League Division Two, 2013 season, for matches played up to 17 July 2013.

Datastadium’s a very good sports data provider in Japan — I know that Prozone and STATS LLC work with them — and it looks like their algorithm for calculating effective playing time is very similar to ours.  It would be interesting to see what accounts for stoppages in play and which teams are more responsible for the fluctuations in playing time.  The first issue would require access to J1 and J2 technical/tactical data but the second can be done now, and I’ll return to it in a future post.