Throughout Argentina’s Superliga season I’ve presented two league tables side-by-side — one based on the actual league results, and an alternative table based on the expected goal scorelines. Here’s the final table: 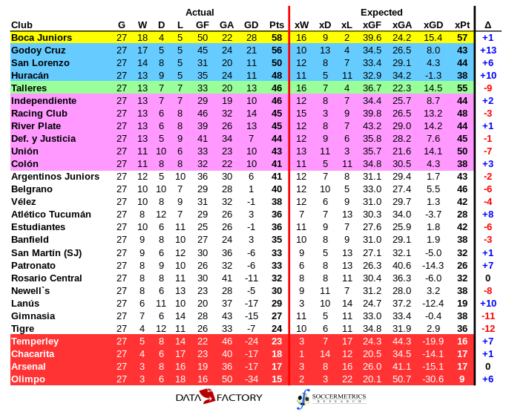 (I color coded the outcome zones for the teams; yellow is for the league champion, blue goes to group stage of Copa Libertadores 2019, green goes to playoff round of Copa Libertadores 2019, purple represents berths to Copa Sudamericana 2019, and red represents relegation to Argentina’s Nacional B. And in Argentina, relegation is complicated, but that’s supposed to change in a few years.)

Displaying the two tables is well and good as it allows one to observe which teams are over- or under-performing their expected results based on the chances that they generate in a match. But what are the actual records in those matches where the team is expected to win, lose, or draw? I’ll examine that in this post and point out some interesting observations from the recently concluded Superliga.

One complicating issue of computing expected results is defining one.  Expected goals are decimal values, yet draws are a part of the game, so one needs to determine a difference threshold between opposing goal values that would define wins, draws, and losses. I observed a season of actual and expected goals results in the Superliga and other top-flight leagues and selected the threshold that yielded the best correlation between actual and expected results. You can see the results here, but I decided on a threshold of 0.4 xG.

With thresholds decided upon, the table breakdown becomes an accounting exercise.  I’ve ordered the Superliga sides by their final point totals with goal difference as the first tiebreaker.  Results are broken out into results from expected wins, expected draws, and expected losses.

If you examine the chart, three things reveal themselves very quickly:

You could probably extend these observations to other teams in other leagues and competitions. At the very least, it provides some confidence that something real is being captured by expected goals.

Returning to this season’s Superliga, Boca Juniors’ advantage in the title race came from their ability to generate more chances than their opponents in most of their matches, and most importantly, convert them. Boca and Talleres created significantly more scoring opportunities than their opponents in 16 of their 27 league matches. Boca won 13 of those matches, while Talleres could only win nine and drew six. The resulting eight-point difference was definitive in the championship. Racing created enough chances to win 15 times, yet lost all points three times. In the end those results made the difference between a Libertadores place and a berth in the Copa Sudamericana.

So how did Godoy Cruz emerge as a serious challenger?  They had an insane record from matches that they were expected to draw. In those 13 matches in which Godoy Cruz were expected to draw, they won the most points (25), scored the most goals (18) and achieved the best goal difference (+5). They even managed to scrape a win from the four situations in which they were outplayed. They had an excellent record when they enjoyed the majority of quality chances, but those matches didn’t happen often enough for them to overhaul Boca’s lead.

There’s a lot more slicing to be done with the xG data, and I’ll continue that in future posts.