You are here: Home › League Competitions › Team Performance › Boca Juniors, champions again: Not as close as it seemed

Boca Juniors have repeated as champions of Argentina and champions of the newly created Superliga.  Boca has been at the top of the league for over a calendar year, the title has been Boca’s to lose since November or December, and all challengers to the title had faded away or were turned back in showdowns with Boca. It was only in the final weeks of the championship that Boca’s players appeared nervous and their most serious (but inexperienced) challengers emerged. In the end, Boca’s talent and experience finished the job and delivered the Xeneizes their 33rd domestic league title.

Boca’s final winning margin in the Superliga was two points, and they had clinched the title with one matchday to go.  How close was the league, really?

If you take a look at the point gap to Boca, almost all of the presumptive challengers faded away or failed to close the gap to less than six points. Here is the gap to San Lorenzo, who started the summer break three points behind Boca. The return saw them lose ground, fail to regain it in a critical draw at home to Boca, and then fall definitively away: 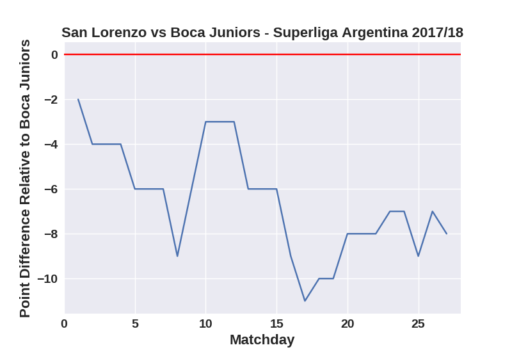 Independiente were viewed by some experts to be a potential challenger to the champions, but they could only close within six points after matchday 10 in late November. They hovered within eight to eleven points of the top before definitively falling away in late February. 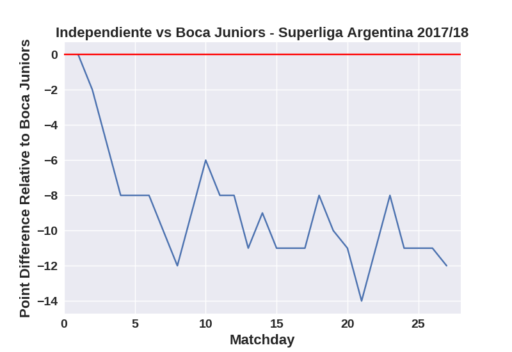 Of the challengers, Talleres were the one that didn’t go through a boom/bust cycle; rather, their league position stabilized within a 6-9 point range of Boca, which promoted them into second place. I certainly thought that they should be viewed as serious challengers. Alas, a loss at Boca put paid to their challenge which eroded away in the closing weeks. They did stop their fall in time to qualify for Copa Libertadores 2019, which is always an achievement for a provincial side. 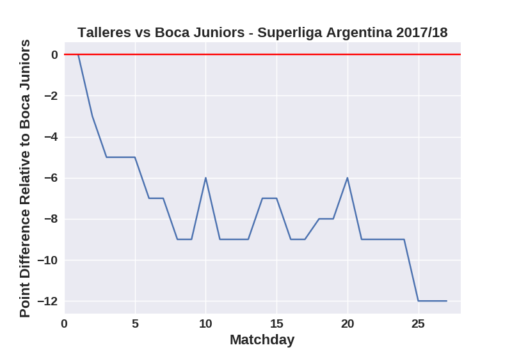 Godoy Cruz were the side who emerged out of nowhere to finish closest to Boca and evoke feelings of what could have been. And that the most serious challenger turned out to be Godoy Cruz! At the summer break, El Tomba were in 12th place and 13 points off the leader. Diego Dabove was hired as the new manager and the club gained position in the table but fell back in the points. Their late kick closed the gap to Boca dramatically and they took over second place after matchday 22. Even though they closed to within three points of Boca, overhauling them remained a remote possibility. The draw to Banfield in matchday 24 stopped their momentum and allowed Boca to clinch the title a week later. 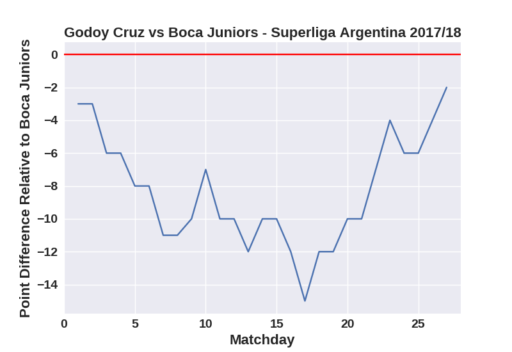 Boca were never headed in the championship, and the point gap between Boca and their closest follower in the league table makes that clear. After matchday 12, when the Superliga took a summer break, the gap between Boca and second place grew to nine points and didn’t dip below six until matchday 23. The title was effectively Boca’s by then. 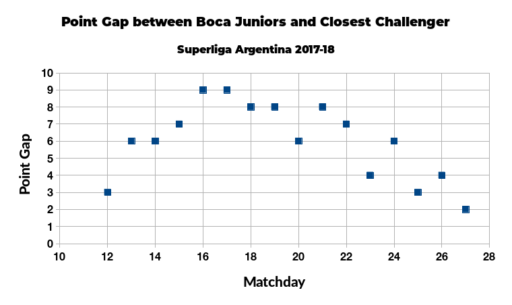 The final table will show that Boca Juniors won the Superliga by a mere two points. But those who followed the league closely knew that there was only one team on course to win the title. In future posts I’ll look at what made the difference for Boca as well as Godoy Cruz’s dramatic surge in the final months of the league season.