Jorge Sampaoli, manager of Argentina’s national team, announced his preliminary squad list for the 2018 FIFA World Cup earlier this week.  The fact that no fewer than seven players currently in Superliga were in the group of 35 raised more than a few eyebrows, but few were more surprising than River Plate’s Franco Armani.

Armani joined River during the summer transfer period (January window in European football parlance) from Colombia’s Atlético Nacional and attracted attention for his impressive displays in goal. So impressive were his displays that observers of South American football started to consider him as a dark horse for the Argentina national team and possibly a starting role in Russia.

So now Armani has been made the initial cut for Argentina.  Does he deserve to be there? According to the goalkeeper metrics that I’ve calculated for the Superliga, yes: 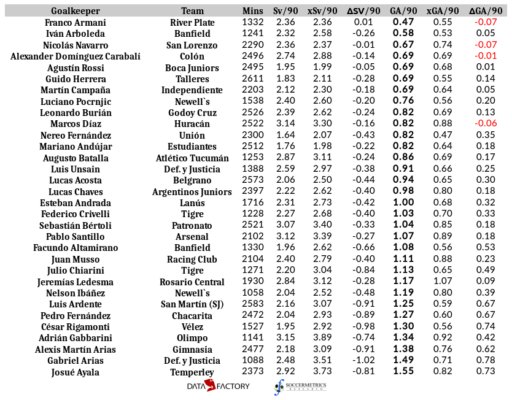 Expected and actual saves and goals allowed per 90 minutes by goalkeepers in Superliga Argentina, 2017-18 season. Data supplied by DataFactory LatAm.

By virtue of having arrived in the second half of the Superliga season, Armani hadn’t appeared in as many minutes as most of his colleagues. Among the 33 goalkeepers who have appeared in more than 1000 league minutes, 18 played more than 2000 minutes of league play, and only eight keepers had fewer minutes than Armani. No one bettered Armani’s 0.47 goals allowed per 90 minutes.

It is true that Armani hasn’t faced as many shots as his counterparts, whether as an absolute number or per 90 minutes. It’s also true that as goalkeepers face more shots, they’ll eventually let more in.  The chart below, which maps goals allowed per 90 minutes as a function of shots on goal per 90 minutes, gives an indication of that.  Armani’s performance is highlighted in orange on the lower left.  Armani almost certainly benefited from an improved defensive in front of him (River had allowed 18 goals in the first 12 league matches of the season but only eight in the remaining 15) but he was one of the few goalkeepers whose goals allowed statistics were better than expected given the characteristics of the shots he faced. 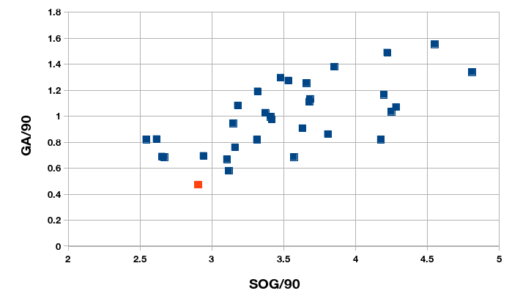 The “goals saved” metric has gained some degree of traction in football analytics circles this year, in particular when used to describe the exceptional performance of goalkeepers such as David de Gea. I used a different approach to calculate expected goals allowed by goalkeepers, and I called the end result “goals allowed above expected” or GAAx. The results aren’t nearly as dramatic as those of other analysts, but seeing Armani’s name at the top of the list gave me some degree of satisfaction. 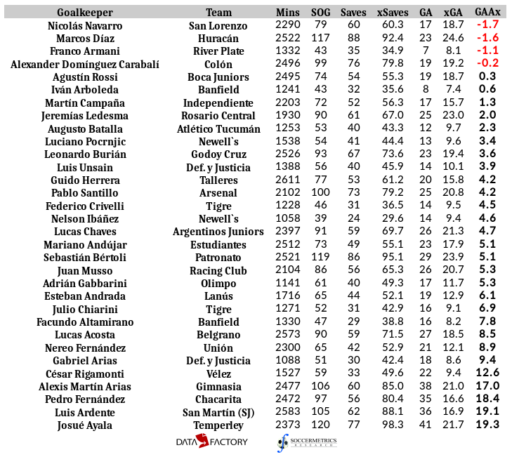 This analysis hasn’t delved into Armani’s distribution of the ball, and it’s not able to make comparisons with the other Argentina ‘keepers who play in Europe or Mexico.  But the data shown here presents another dimension that adds to what Sampaoli saw, and provides some support for his decision to call for Armani. If he makes the final 23, I’ll take a look at his distribution and identify any tendencies therein.