The summer transfer window is now closed, so it’s a good time to update the projections for this season’s Premier League.

A lot of people are visiting this site for the first time, so an explanation of these projections is in order.

The Pythagorean expectation originates from Bill James in baseball and is an expectation of an average team’s record given a pair of run statistics.  I’ve extended it for soccer to project expected points and a possible win-loss-draw record that would produce those points. (You may download my journal article here.)

The projection is not perfect by any stretch and we’d like to project defensive performance better than we are now, but it’s produced some interesting results.

At any rate, here is the updated 2014-15 Premier League projection: 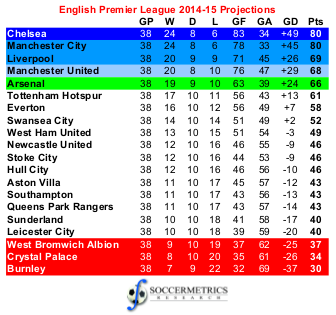 In our preseason projection, we forecast a two-way race between Manchester City and Chelsea, with a slight edge to City.  Now with everyone having concluded their transfer business, we give a slight edge to Chelsea, but given the RMSE of the Pythagorean projection the league is too close to call.  Below this pair — and there is a gap between them and the rest of the top five — the League should settle into a three-way race between Manchester United, Arsenal, and Liverpool for the Champions League places.  The expected table has Liverpool leaping over United and Arsenal into third, and Arsenal missing out on the Champions League altogether, but I’d pay more attention to which cluster of teams is in the mix.

We’ve received a lot of flack for the projections for teams in the middle of the table, especially West Ham, and the closeness of the teams in the table.  As I said earlier, the projections are functions of goals scored and allowed, so if there is little difference between the goals statistics of a cluster of teams, their expected points will be similar as well.  Of course there is also a fair amount of uncertainty/luck that influences the actual point totals, too.

As far as West Ham were concerned, we felt that the addition of Zárate and Enner Valencia would bring more goals while the defense would stay about the same.  One could argue that West Ham aren’t as good as an average team with similar statistics, but we didn’t adjust for deviations from an average side.  You could also argue the same for Swansea, Newcastle United, and Stoke City.

We project the same bottom three for relegation as we did pre-season, but we are less optimistic about Leicester City and Queens Park Rangers now.  Conversely, we are somewhat more optimistic about Hull City and Aston Villa.

We look forward to being proved spectacularly, hilariously, wrong as the season progresses.