This is Part 4 of our European league projections, and we start down under with the Australian A-League, then focus on selected leagues in Central Europe, and finish with Italy, which isn’t in Central Europe but close enough.

Again, if you want to know how we come up with these projections, we explain them in Part 1 of the series.

Australia: The A-League has a finals series in which almost everyone progresses (just kidding, it’s six of ten teams), so we won’t be predicting a league champion.  But the regular season champion (“Premiers” in Australian) means something in terms of a first-round bye and a direct route to the Asian Champions League, so we expect Central Coast Mariners to finish at the top.  But Melbourne Heart, Western Sydney, and Sydney FC are all within the Pythagorean margin of error, so in reality the premiership race will be a four-team race. Brisbane and Melbourne Victory should complete the playoff field.   There’s no relegation from the A-League, but we expect Newcastle United Jets to finish with the wooden spoon. 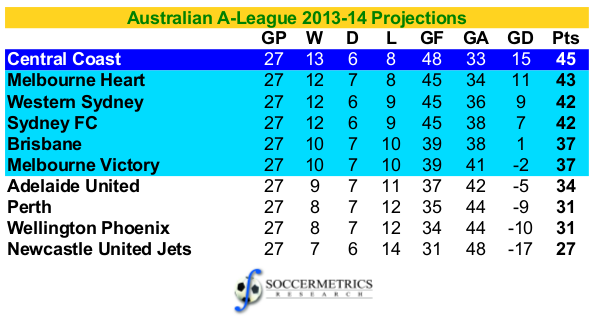 Hungary: We expect Györi ETO to win NB1, followed closely behind by Videoton and Ferencváros.  The relegated teams will be Lombard Pápa and one of either Puskás Academy, Paksi, or Diósgyöri. 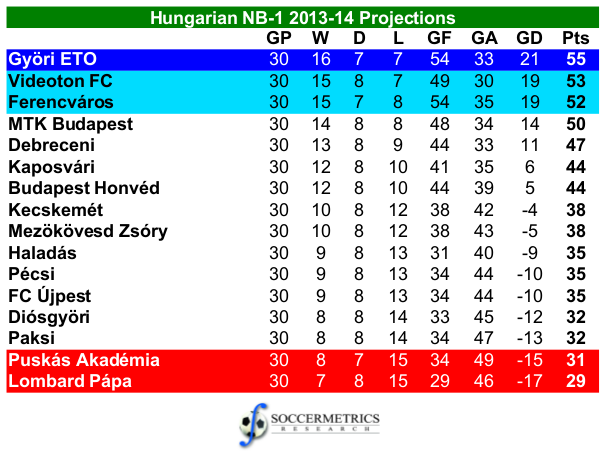 Serbia: Partizan Belgrade should win the Superliga comfortably but at least 13-15 points from Red Star Belgrade.  At the bottom we expect Vozdovac and Novi Pazar to go down directly, with Radnicki Nis left to face the relegation playoff. 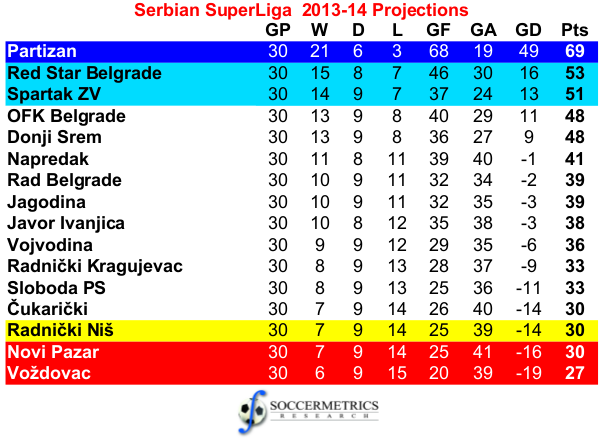 Turkey:  Süper Lig figures to settle back into a two-team race after challenges in recent years from upstarts.  We expect Galatasaray to repeat as champions by a narrow margin over Fenerbahce.  The bottom three are expected to be Gaziantepspor, Konyaspor, and Karabukspor. 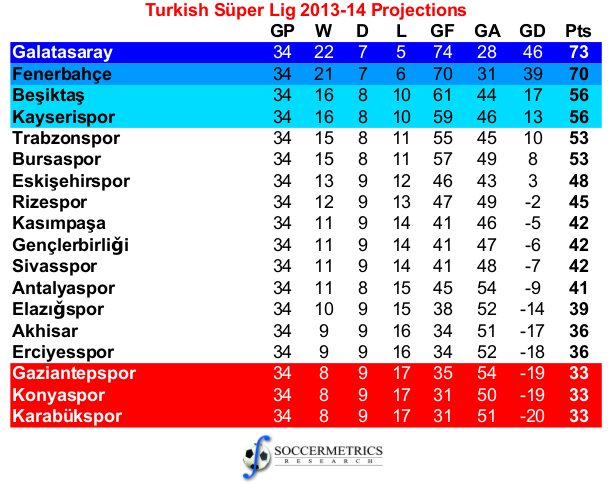 Italy (Serie A): We expect Juventus to secure a hat-trick of titles by a narrow margin over Napoli.  The league expectation is different from other leagues in that there is more spacing between clubs in the top four.  Roma and to a lesser extent Milan could have an impact on the Scudetto race, but we see it as primarily a two-club contest.  At the bottom, we expect Sassuolo, Livorno, and Verona to make a quick return to Serie B. 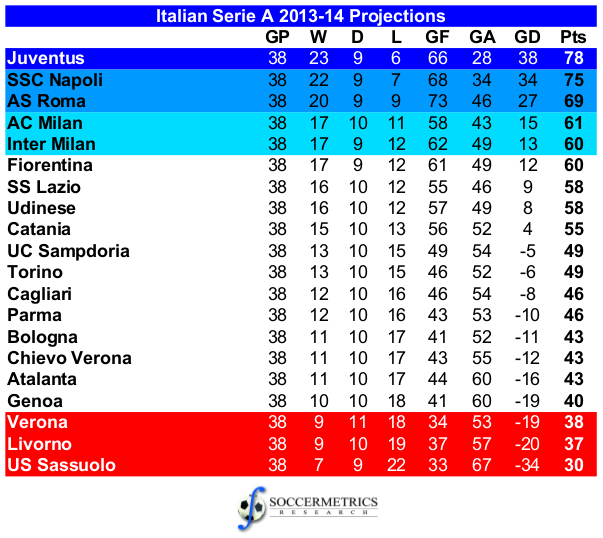 There are a couple more parts of this series to go: one devoted to the Spanish Primera and Segunda, and another for England’s Football League, all leading up to the preview that everyone is waiting for: the 2013-14 English Barclays Premier League.