You are here: Home › Tournament Design › A history of Mexico’s league playoff system: The first-leg effect

In my previous post on Mexico’s playoff system (the Liguilla), I wrote about the percentage of playoff seeds that advanced to the latter stages of the tournament as a function of the criteria for deciding series winners.  In this post I’ll analyze the effect of the first-leg result — and the playoff format — on the outcome of the series.

As in my previous post, I’m going to focus on the 58 tournaments, from the 1981-82 season to the 2016-17 Clausura, that had at least an eight-team playoff field and don’t use replays to decide a series winner.  I’ll use data on the playoff matchups and final scorelines over both legs of the wildcard, quarterfinal, and semifinal rounds to answer the following questions:

Winning First Leg is (almost) Everything

In the Mexican Liguilla, the lower-placed team from the regular season will host the first leg.  The importance of the first leg result — for both teams — cannot be overstated.  A positive result tilts the tie in favor of the winning side, and a draw shifts the advantage to the away side.

The knockout ties of the 1980s, which lacked any series tiebreaker other than penalty kicks (48 two-legged ties), saw the first leg hosts win that opening match 41.7% of the time (20 wins). But carrying an advantage on aggregate was no guarantee to the first leg host as they would go on to win 40% of those series.  A draw for the away side — the higher seeded team — swung the advantage emphatically their way, and an away win would all but seal the series.  Only twice did a tie featuring an away win in the first leg end in anything other than a win for the higher seeded team after normal time, and in one of those times the series was decided on penalties.  Nevertheless, penalties did occur quite often (25% of all ties) if a home win or draw occurred in the first leg. 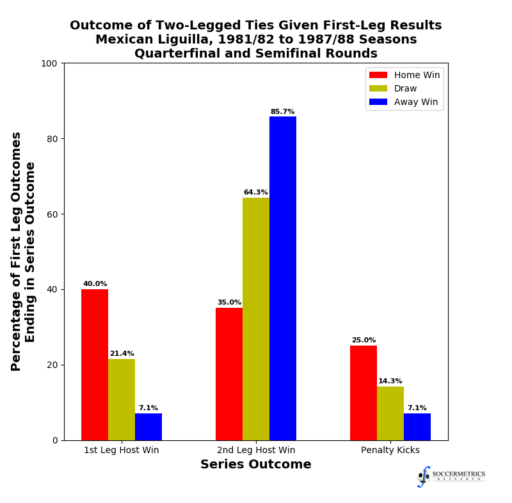 The use of league position as the sole tiebreaker during the 1990s and 2000s (228 ties) eliminated penalty kicks as a series decider, provided a safety margin to the second-leg hosts, and forced the first-leg hosts to gain enough of an advantage to weather the away leg.  The first-leg hosts appeared to do just that during this era as they won 64% of the series in which they won the opening match.  The league position tiebreaker made first-leg draws almost fatal to the lower-seeded teams’ chances — when you include the proportion of ties that are decided on league position, the higher-seeded teams won 86% of the ties that had a first-leg draw and 92% of the ties that featured a first-leg away win. 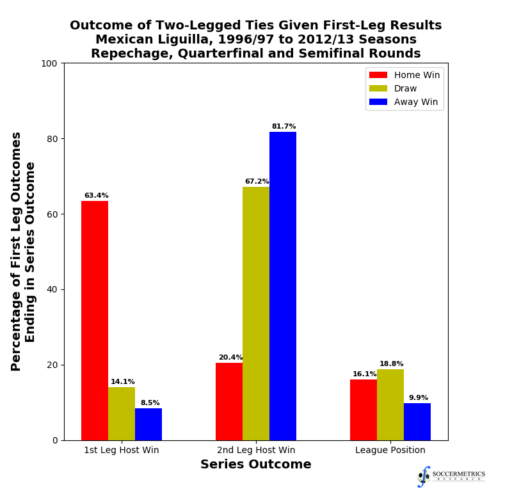 The current playoff system (100 ties) uses away goals and then league position as the tiebreakers, which as a result provide an additional path for the lower-seeded team to advance.  The primary path for such teams to win the two-legged tie remains a first-leg win.  The difference observed with this format is that a first-leg draw is no longer as fatal to the lower-seeded team’s chances as in other formats.  Could this be a result of the lower-seeded side having more of an incentive to seek away goals in the second leg?  A away win does swing the advantage strongly toward the higher-seeded side, but it appears to be more pronounced because of the away goal advantage.  In general, the away goals rule has been used to decide 13% of the ties, and league position to decide 10%. 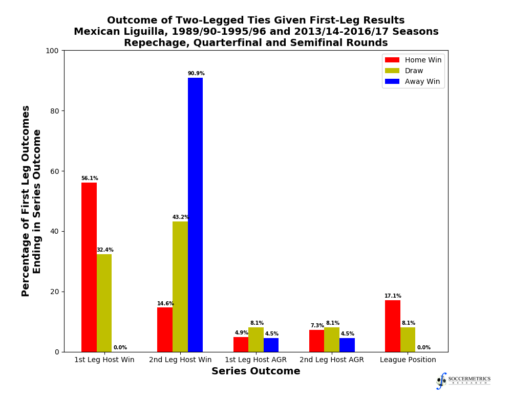 The Mexican Liguilla has seen a variety of criteria for deciding two-legged ties since they were first used in the 1970s.  Throughout the changes in the formats, it remains essential to score a win in the first leg in order to gain an advantage in the series. The use of the ventaja deportiva rule has provided a safety margin to the higher-seeded teams, but the imposition of away goals has made a drawn first-leg result less of a disadvantage to the lower-seeded side.

The next posts in this series will address the effect of first-leg goal differential on the series outcome and examine the use of the two-legged tie in the finals.  Watch this space.