You are here: Home › Tournament Design › A history of Mexico’s league playoff system: Which seeds advance?

I’ve written about the two-leg format for knockout/playoff matches in soccer on multiple occasions.  Most of my writing has focused on the UEFA Champions League and Major League Soccer, but in this post I’ll write about a North American domestic league that has a long experience with playoffs and the two-leg system: the Mexican League.

How Mexico decides a champion

Mexico’s football leagues, from Primera División to the lower divisions, have used playoffs (or Liguilla in Spanish) to decide the league champion since the 1970-71 season. A few playoff seasons have involved a final group stage followed by a two-leg final, with the exception of the 1974-75 season in which the league champion was the top team at the end of the final group stage.  Most of the seasons have involved the two, four, eight, nine, or ten best teams in the regular season, with seeds for the first six to eight teams and wildcards for the remaining two or four teams.   The teams play two-legged ties over one, two, three, or (rarely) four elimination rounds with reseeding after each round.  The criteria for deciding a series winner has changed over the history of the Liguilla, as you can see in the figure below. 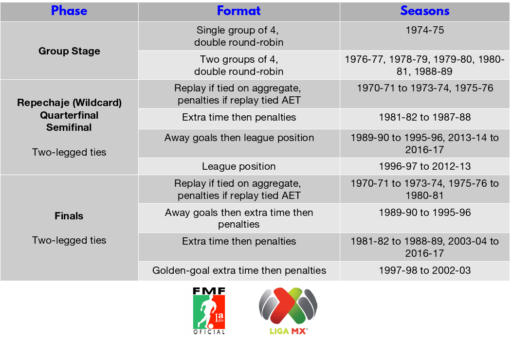 A summary of the playoff formats over the history of Mexico’s Liguilla system.

The finals have been treated a little differently:

For this analysis I’m going to disregard playoff seasons with group stages or less than eight playoff teams in the field.  That leaves 59 tournaments, from the 1975-76 season to 2016-17 Clausura playoff, that have at least a quarterfinal round. (Six tournaments had two wildcards and fourteen tournaments featured four.) I’ll use data on the playoff matchups and final scorelines to observe the percentage of playoff seeds that advance to the later rounds of the playoff tournament. The final series use formats that differ from those in the previous rounds, so I’ll place that round aside and return to it in a future post.

Do higher seeds advance further in the Liguilla?

Over the 40 year history of an 8-team (or more) Liguilla, the answer is yes.  If we start with the distribution of seeds in the quarterfinal stage and proceed to the semifinal stage, we will observe that the top four seeds — the seeded teams that would host the second leg of the quarterfinal ties — appear in the semifinals at a rate of just over 60%.  Over the history of the wildcard/repechage rounds in the Liguilla, the higher-seeded teams won at a much higher rate from 65 to 75%. 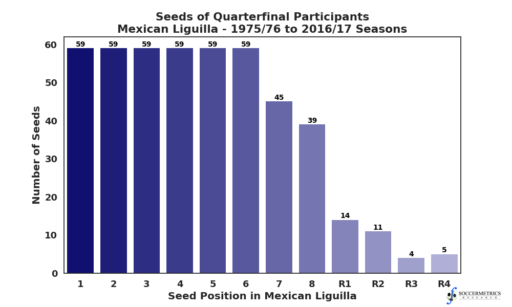 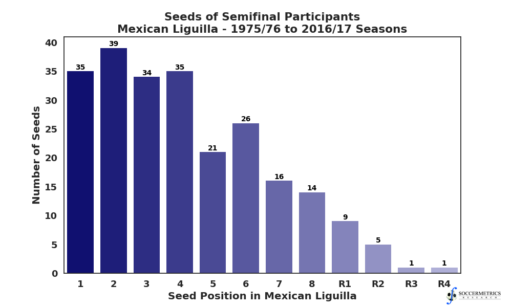 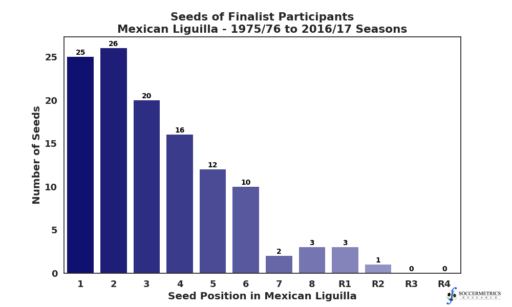 If the top seeds advance to the final, they are almost assured to host the return leg, so it’s not surprising to see that the league champion has come from the top three seeds in 43 of the 59 8-team Liguillas.  It is possible to win Liguilla as a lower seed (Santos Laguna won as an 8-seed in 2015, and Pachuca won their first title as a wildcard in 2000), but in general the playoffs provide an edge to the top two or three performers in the regular season. 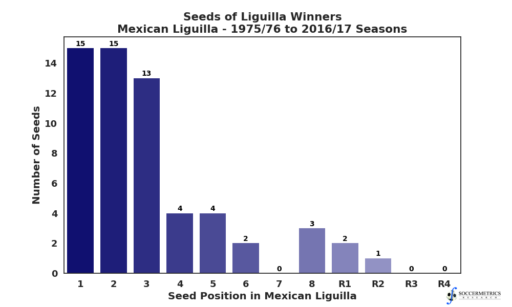 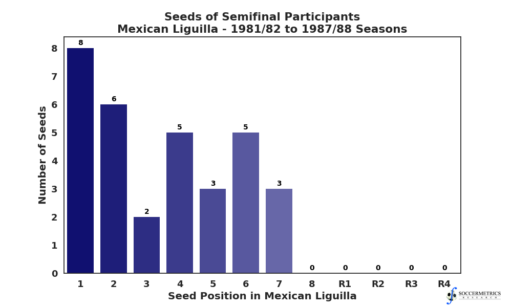 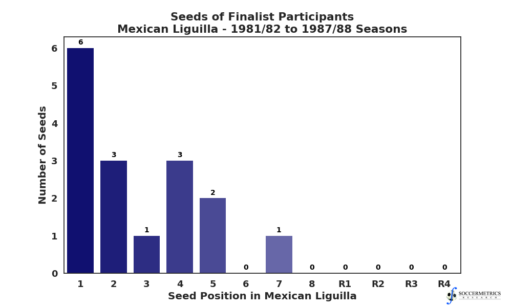 Five of the eight league champions during that period were the top teams over the regular season when it was a double round-robin.  (Even in the World Cup season of 1985/86, when the League played short tournaments, the league champions were #2 and #1 seeds, respectively.)

The playoff seasons during which league position was the sole tiebreaker saw the higher seeds advance at rates above the overall Liguilla average, but the performance of the highest and lowest seeded teams was surprising.  In particular, the 8- and wildcard seeds had success in knocking off the top seed in the quarterfinal round, which indicates that the top seeds were losing a significant number of ties on aggregate. 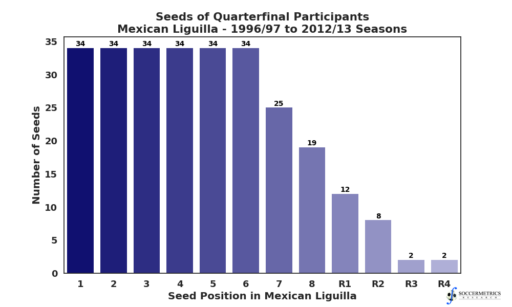 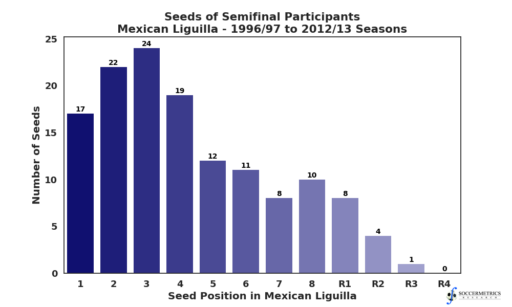 This success continued into the semifinal round; all of the wildcards who advanced to the Liguilla final did so during the ventaja deportiva period when they had to win ties outright to advance. 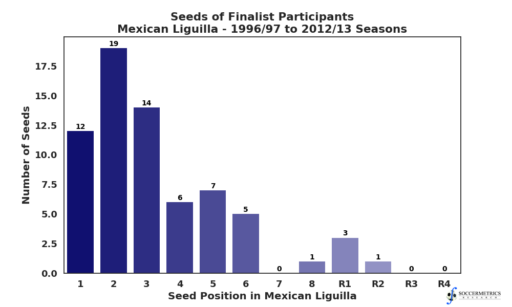 Over the whole of the ventaja deportiva era, it was the 2- and 3-seeds who advanced to the latter stages at a much higher rate.  The top three seeds won most of the titles, but there were a surprising number of upset winners during this era.

The second most-used format in the Liguilla has been the use of the away goals rule as the first tiebreaker, followed by league position as the final tiebreaker.  During this period the top seeds advanced to the later rounds at rates close to the Liguilla average, but the 4-, 6-, 7-, and 8-seeds advanced at a much greater rate to the semifinals and finals.  (None of the wildcard teams advanced to the finals during this period, but the wildcard round was abolished when this format returned in 2013.) 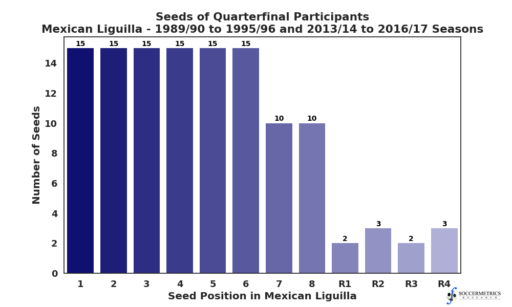 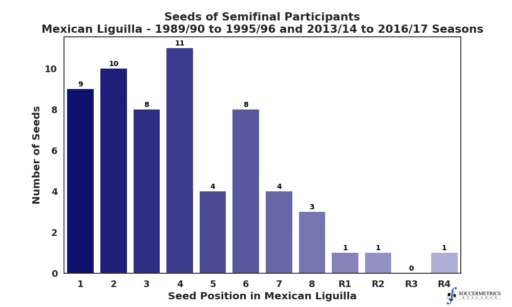 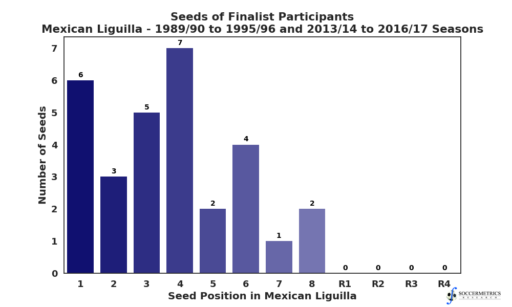 It’s been said that playoffs have a randomizing effect on league championships, and there’s been some of that in the Mexican Liguilla since its creation in 1970.  The top-level competition has seen a variety of formats, from group stages and replays to two-legged aggregate ties with the away goals rule and league position as tiebreakers.  Over the history of the playoff era, the top seeds have advanced to the latter stage of the competition and the top three seeds have won the majority of the league championships.  Nevertheless it’s been interesting to see that despite the use of tiebreakers that theoretically tilt the advantage toward the higher-ranked sides, the lower seeds have advanced with some regularity.

Seed advancement covers up a number of details, among which the percentage of sides that advance after a positive or negative first-leg result, as well as those series that end up decided on these tiebreakers.  I’ll explore those details in the next part of this series.