The 2017 Major League Soccer regular season ended six weeks ago (and the playoffs ended this past weekend!), so it’s time for a new edition of the Front-Office Efficiency table.  As was the case last year, this table is displayed as an infographic on the Soccermetrics SlideShare page and as twenty-two individual panels on the Soccermetrics Twitter page.

The efficiency metric is version 4.0 which was developed in 2015.  You can read more about the process here.  Only payroll amounts are factored into the financial inputs — not academy spending, which is not made public across the league, or transfer fee spending, which MLS teams have avoided until very recently. I am very aware of the issues with the salaries reported by the MLS Players Union, but in my opinion, they’re better than nothing and I want to focus more on trends.

Here are my main observations from this year’s results: 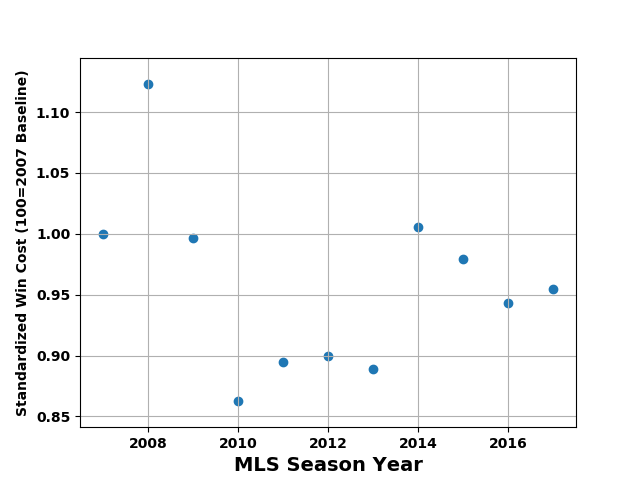 The average standardized cost of MLS teams in the Designated Player era (2007 season to 2017 season). Averages are relative to 2007 cost.

The Front-Office Efficiency infographic is shown below.  You can find an updated table of costs per point in real US dollars and standardized win costs in the ProjectData repository on GitHub.