[This is the start of a new series on Soccermetrics that I’m calling Data Deep Dives. The idea is to take a featured match for which I have event or positional data and write a match review that incorporates analytics, video clips, and prose.  It’s a work in progress as the analyses evolve and expand over time and my expository skills for a general (but more numerate) audience become more refined.  I hope you enjoy it and I appreciate your comments.]

Argentina’s Superclásico between River Plate and Boca Juniors is one of the most famous club derbies in the world and the highlight of Argentina’s domestic season.  This specific match carries special significance not only because it marks the 200th league match between the two sides in the professional era, but also because Boca comes into the match on a historic start to a league season — a perfect seven wins from seven matches.

River sent out a second-string team against Talleres as the usual starting XI was rested ahead of their Copa Libertadores semifinal against Lanús.  The reserves were routed 4-0 by La T in Córdoba — Marcelo Gallardo’s worst result as River manager — and the starters were knocked out of the Libertadores by a ferocious Lanús comeback after falling three goals behind in the tie.  For the Superclásico, Gallardo kept the same starting lineup from the Libertadores semifinal (Soccerway has a different shirt number for Lux for some reason).  He also stayed with the 4-3-2-1 formation that he deployed mid-week.

Average position of River Plate players who appeared in 1st half, River Plate vs Boca Juniors, Matchday 8, Argentina Superliga 2017-18.  Starting players are represented by circles, substitutes by squares, and numbers in shapes are player numbers.

Boca manager Guillermo Barros Schelotto made no changes to the side that defeated Belgrano 4-0 the previous weekend in the league.  He also preserved his tactical scheme from the previous match, a 4-3-3 with Wilmer Barrios in a deep holding role and Pablo Pérez and Nahitan Nández deployed forward on either side of him.  Edwin Cardona is usually a bit behind Darío Benedetto and Cristián Pavón, so it’s possible to call this setup a 4-3-1-2, too. 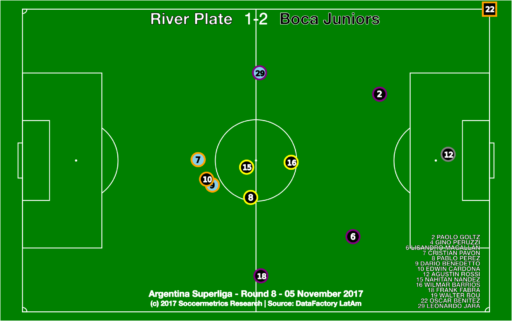 Average position of Boca Juniors players who appeared in 1st half, River Plate vs Boca Juniors, Matchday 8, Argentina Superliga 2017-18. Starting players are represented by circles, substitutes by squares, and numbers in shapes are player numbers.

The match’s momentum ebbed and flowed between the two teams.  If you look at the expected goals as they track over the length of the match, you can see three stints in the match; a ten-minute feeling out period followed by about twenty minutes of Boca dominating the play and chances, fifteen minutes of River regaining the initiative (but during which Boca scored), and a second half dominated by River yet punctuated by another Boca sucker-punch. 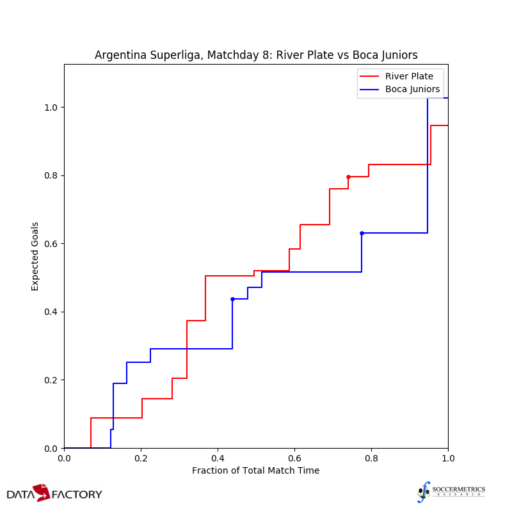 In the first half Boca distributed the ball wide from their center backs toward the two wing-backs, who then worked the ball toward the center.  Leonardo Jara was excellent in his distribution from the right-back position, but he was overshadowed by Pablo Pérez’s work.  Pérez was present everywhere in Boca’s buildups, whether it was being the primary link to Benedetto or Pavón or working with Barrios to distribute the ball from the center. In the mean, Boca’s distribution was directed more toward the left side, and their midfielders and strikers were receiving the ball from close to the center of the field. 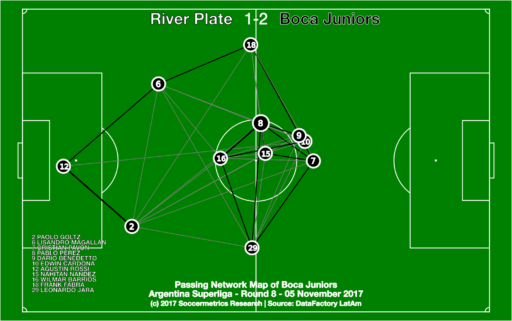 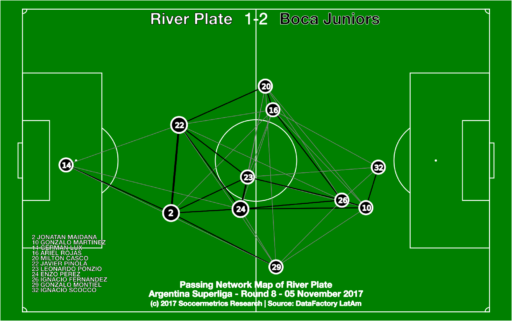 River’s distribution was directed more toward their right side, although they did put Boca on the back foot by attacking from the left midway through the first half.  Leo Ponzio has been fundamental to River’s ball movement this season, but today Enzo Pérez was the most dominant of the three midfielders.  It was most unfortunate that it was during River’s moment of relative dominance that Boca scored the opener.  It was the only foul that River had conceded in the center of the field in the first half, and to make matters worse, it came from a reckless flying stamp of a challenge from Ignacio Fernández that saw him receive a straight red card.  Edwin Cardona made no mistake with the resulting free kick.  It was a blow to River not just because they fell behind, but because Fernández was such a vital link to the River strikers.

At the very start of the first half, Gallardo brought on Nicolás de la Cruz for Ariel Rojas in an attempt to recover the link between midfield and attack that was lost when Fernández was sent off.  For the most part he was successful and was one of the most central players in River’s passing network in the second half.  The most important player, once again, was Ponzio.  He played more forward than he usually does in the league and was more opportunistic in attacking loose balls (one such opportunity led to River’s equalizer).  Boca started to play wider but especially on the left side as Fabra pushed up aggressively.  The difference in the second half was that Boca’s midfielders and strikers were receiving the ball from wider positions on the pitch as well.  Cardona dropped further back, and then dropped out entirely when he was sent off for a supposed elbow on Enzo Pérez (I’m not sure what Pitana saw). Their passing network became more diffuse but more robust as well. 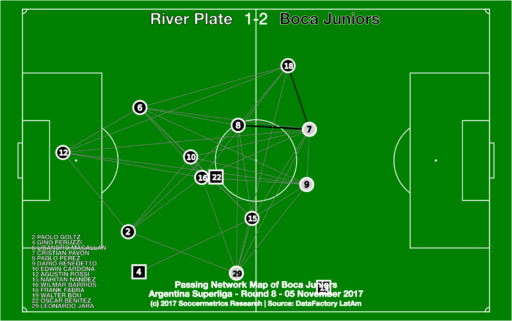 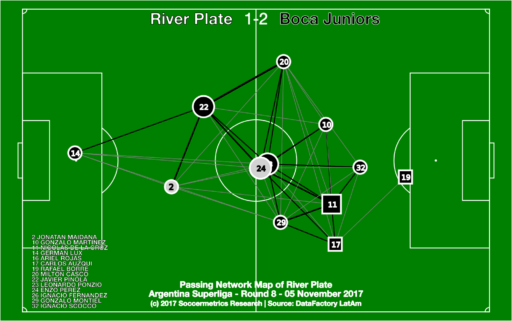 River’s equalizer came during their moment of dominance in the second half, but it was more of an opportunistic chance than a well-worked one.

Boca reacted almost immediately and scored the winner four minutes later when Pablo Pérez sent a perfect cross for Nahitan Nández to volley past Lux.  That goal, from Boca’s first intent on goal in the second half, changed things.  It deflated River and they didn’t muster any dangerous opportunities afterward.  Boca made all three of their substitutions in the last ten minutes, none of whom participated much except for Edwin Benítez.  Near the end Fabra had a great chance to put the match beyond all doubt, but directed his shot wide.

In the end, Boca had earned three points against their eternal rival, and continued their historic start to a league season.  River put the end to a difficult week on domestic and international fronts.  It was a very entertaining Superclásico with a number of goals and controversial incidents, but with the possible exception of the third, all of the goals were the result of individual brilliance than coordinated team play.

Match data has been supplied by DataFactory Latinoamerica.