The other night I found myself included on a message thread where a guy (this one) is attempting to develop a soccer Pythagorean formula that would allow him to predict the number of points won over a league season based on the number of goals scored and allowed by a team over a season.  From reading the website linked in the previous sentence, I suppose this Pythagorean is to be used to predict the odds of making the post-season playoffs or of winning the league championship or getting relegated in leagues that have either option.

I’m embarrassed to admit that I didn’t know much about a Pythagorean before I got linked to this message, so I did a search and found this summary of a Pythagorean on Wikipedia.  It originated from Bill James and is derived as the following: 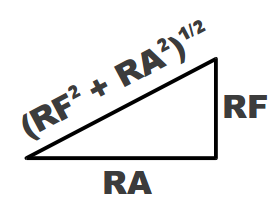 So the win percentage in the original Pythagorean can be expressed as the sine of the angle opposite RF.  When that angle reaches 90 degrees, the sine reaches 1.0.  For that to occur, the number of runs allowed must approach zero, or the runs scored must greatly exceed the runs allowed.  And that makes sense, because if either one of those two scenarios occurs, the chances of having a perfect record goes way up.

It appears that the key element of the Pythagorean is the exponent which is constant for all three terms in the expression.  A number of baseball sabermetricians have found that an exponent slightly less than 2 (1.81) provides a more accurate predictor of games won.  In basketball it’s a much larger value.  I have no idea what it is in soccer, or whether the exponent changes for different leagues and competitions.

There is a paper written by Steven Miller, a mathematics professor at Williams College, that gives a more theoretical underpinning to the Pythagorean.  I’ll take a look at the paper to see if I can glean anything interesting.  One item that jumps at me is that he assumes a Weibull distribution for runs scored in baseball.  Soccer goal distributions have been found to follow either a Poisson distribution or a negative binomial distribution.  Maybe it makes a difference, maybe it doesn’t, but we should find out either way.

I would like to see some statistical justification for the exponents that I’ve been seeing in some of the soccer Pythagorean formulae.

UPDATE (5 Feb 2013): Finally got around to correcting the Pythagorean distribution.