Match tempo is an important metric in soccer and other field invasion sports because it provides the context for understanding other in-game actions such as possession and offensive and defensive output.  Much of the pioneering work in tempo in sport started with people such as Dean Oliver, John Hollinger, and Ken Pomeroy in basketball and spread to other sports, as illustrated in sites such as Alex Olshansky’s Tempo-Free Soccer and Justin Moore’s Tempo-Free Gridiron.  But does the current formulation of match tempo — possessions per minute or per match — apply well to football?

I argue the following:

Number of possessions is a suitable tempo metric in field invasion sports that are played over a relatively small playing area or are discontinuous in their play, such as basketball, ice hockey, American/Canadian football, (maybe) rugby or indoor lacrosse.

But in invasion sports that are fluid in their play or played over larger areas such as the other football codes (association, Australian, and Gaelic) and the outdoor versions of hockey and lacrosse, counting possessions doesn’t work as well for expressing tempo.

Let’s take a step back and consider which question we’re trying to answer by calculating tempo.  We want to know how quickly a team is playing the ball.  We deconstruct match play as a combination of touches over space and time.  Tempo is defined as the rate or speed of a motion or activity, and in sport, tempo is the rate of movement over time and touches.

(Apologies for getting all meta, but I want to be really precise in what I seek to answer.  Hope it gets clearer in a moment.)

Soccer has a number of differences with basketball, of course, such as the much larger playing area (17 times larger) and the lack of a shot clock.  As a result there is theoretically no lower limit on total possessions or speed of play, although there are practical limits in matches that aren’t totally contrived (hello, Austria-Germany ’82).

Another major difference from basketball is the large number of one-touch possessions in football, which aren’t really “possessions” in that they aren’t controlled spells of play by a team and artificially inflate the possession count if not removed.  The rate of possessions in a match represents the variation of play between the two teams, and could partially convey the overall match tempo, but it’s difficult to infer much about the tempo of the competing teams within the match.  It’s possible that teams have a high number of possessions because they play quickly — or because they can’t hold onto the ball. 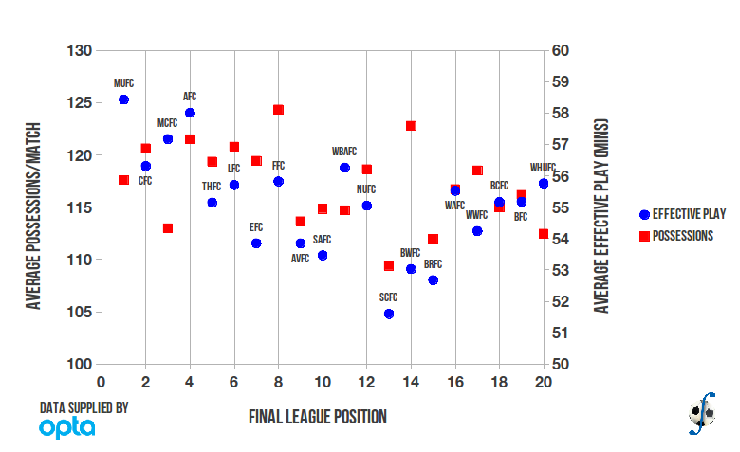 Relationship between final league position and effective play and number of total possessions in the English Premier League, 2010-11 season.

So what then?  Well, it’s important to do the best with the data available while recognizing their limitations.  But as finely grained positional data become more available in football, I propose that we revisit the original definition of tempo — the rate of movement of play over time and touches — and exploit the (x,y) coding in match data.

In the next post of this series, I’ll describe further this revised formulation of match tempo and illustrate it for some English Premier League matches.  My expectation is that there will be a significant difference between both tempo formulations, but we’ll see what the results have to say about that.

OTHER PEOPLE: There have been some similar writings by others over the last two years.  In 2011 Sander Ijtsma (aka 11tegen11) wrote a post on possession analysis that progressed partially down the road that this post travels.  It’s good reading.  There is also this 2012 post on Everton’s passing and pressing tempo using Prozone match data at The Executioner’s Blog.