Continuing my postseason analysis of Argentina’s Superliga, I examine the performance of the players up front.

Argentina has always been known for its conveyor belt of attacking and creating talent. That talent appears to leave for Europe at younger ages these days, to the extent that the best strikers in the domestic league are either journeymen or recent returnees from a European adventure. This season has been a bit of an exception in that the best striker of Superliga is a player in his early 20s: Racing Club’s Lautaro Martínez. Martínez has been among the leading goalscorers in this season’s Superliga, with 13 goals from 21 appearances (1890 minutes). Only Sebastián Ribas of Patronato has matched him, and only Santiago García of Godoy Cruz has exceeded him (17 goals).  No one has created more significant chances than he, particularly from open play. Even more significant is that his performance has attracted the attention of Argentina manager Jorge Sampaoli and a selection to the preliminary squad for the 2018 FIFA World Cup.

The table below displays the top 20 creators of expected goals in the Superliga. Martínez created about 10.3 xG over the season, which topped the list, and also created 6.5 xG from open play, which was also a league-best. Defenders are usually at the top of the xG list from set pieces, but Martínez’s 3.1 xG placed him fourth among dedicated strikers (Nicolás Blandi, Ribas, García) and 10th overall. Perhaps of greatest interest to foreign clubs, he is one of just two players aged 20 and younger on the top 20 list and one of five aged 25 and younger.

Martínez’s chance creation ability is more apparent when his totals are calculated on a per 90 scale. When considering only players who participated in more than 1000 minutes of league football, only he, Javier Marcelo Correa (Colón de Santa Fe), and Fernando Coniglio (Huracán) generated more than 0.40 xG per 90 minutes. Santiago García, who finished as the leading goalscorer in Superliga, managed 0.35 xG per 90 minutes.  By reference, an average shot in the league produced about 0.12 xG. So Martínez a player who has generated chances at a high rate and converted them at a high rate this season.  In fact, the only other player who exceeded Martínez’s ability was Darío Benedetto of Boca Juniors, who averaged more than 0.6 xG per 90 minutes before his season-ending injury.

I was interested in checking out the number of penalty area touches by Superliga players in order to find out whether the names at the head of both charts are the same. To this end, I tabulated all ball touch events within a rectangular region that covered the penalty area (in normalized coordinates, the region covers 80.0 < x < 100.0 and 20.0 < x < 60.0) and computed the number of touches per 90 minutes. The figure below shows the 20 players with the most touches in and around the penalty area. As expected, there are some common names in both lists: 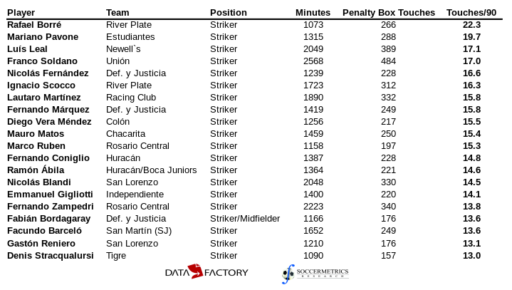 In fact, there are a lot of common names in the previous two lists — 13 players are in the top 20 of xG created per 90 minutes and the top 20 of touches per 90 minutes in the penalty area. Only two players, Rafael Borré of River Plate and Nicolás Fernández of Defensa y Justicia, are in the top five of both lists. Borré is an interesting case; River Plate purchased his rights from Atlético de Madrid last August and he has played regularly in the league since then. Despite entering the penalty area at a much greater rate than his peers and creating more xG/90 minutes than all but four players, he has scored just six goals. Nicolás Fernández did not make as many penalty area touches as Borré, but his xG/90 was identical to Borré’s and his goalscoring is much better (8 goals in 1239 minutes). Incidentally, Lautaro Martínez ranks seventh in penalty area touches per 90 minutes.

Like Franco Armani, Lautaro Martínez deserves to make the initial cut for the World Cup squad. Does he have a good chance of making the final squad? I believe that it will be more difficult because of the other designated strikers competing for places, and perhaps the level of competition that he faces, but his performances in the league have earned him a further look by Sampaoli. He’ll also get a serious look from Inter Milan if recent reports are to be believed.