You are here: Home › Player Performance › What is the best way to model expulsions in a plus/minus model?

In my post a couple of weeks back on adjusted plus/minus, I said that I wasn’t comfortable with the idea of zeroing out the appearance index for players who were sent off in a football match, but hadn’t come up with a suitable alternative.  I’ve arrived upon an alternative now, so I’ll update the model and see if it makes any difference in the plus/minus results.

I model expulsions by extending conditions for the player appearance index.  The concept is this:

One way to visualize this in a way that makes sense (at least to me) is through two queues, which I call penalty queues. Here is a very rough schematic of what happens when a player from the home team is sent off: 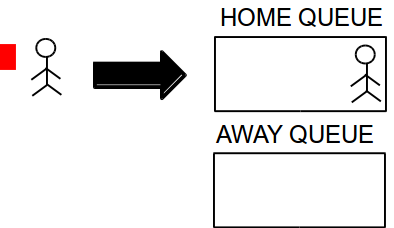 Here’s what happens when the player’s teammate also sees red (bullet #2).  He is also pushed into the penalty queue: 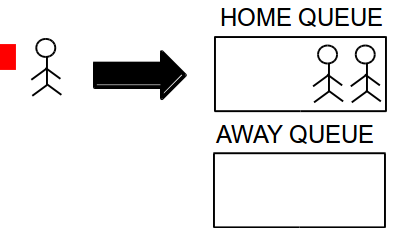 Say this has been a really bad-tempered match, and a player from the away side gets a second booking (bullet #3).  That player is pushed into the away team’s penalty queue, but the first player in the home team penalty queue is removed (or ‘popped’ in queue terminology):

Let’s demonstrate the new adjusted plus/minus model on the same match data I used in my previous post: the 2011-12 English Premier League.  The modeling procedures are the same, so if you want to find more details consult that post at this link.

For reference, here are the top twenty players (minimum playing time 900 minutes) in terms of adjusted plus/minus — each player’s contribution to his team’s scoring margin over 90 minutes — using the original model:

And here are the top twenty players (minimum playing time 900 minutes) in terms of APM augmented with the player expulsion model:

The  effect of the augmented APM model on the test data RMSE is minimal: adding player expulsions adds about 0.5% to the variance in the goal difference data that is explained by the model.  The average home advantage is relatively unchanged from +0.390 goals per 90 minutes to +0.388 goals per 90 minutes.  About 80% of the players see their APM change by 0.01 goals per 90 minutes, which translates to a shift in rank of about four places.  So a majority of players don’t see any difference to their APM ratings.

That leaves about 20% — 60 players — whose APMs change by more than 0.01 goals per 90 minutes, which often results in significant changes relative to their peers.  Here are the 30 players whose APMs increase by 0.01:

It’s probably more than a little amusing that the player most helped by incorporating expulsions into an adjusted plus/minus rating is Joey Barton.  But if you look at his disciplinary record, he was sent off two times during the 2011-12 season.  QPR’s goal difference in his absence wasn’t good — goal differential of -3 — but that doesn’t seem to be a difference-maker.  QPR had a man advantage just one time in 2011-12, at home to Chelsea in an exceptionally bad-tempered match on 23 October 2011, but they had already scored their goal when they went one and later two men up. Daniel Gabbidon, who also played for QPR that season, also has a large shift in his APM, but he was used sparingly during the season.  It’s not clear what accounts for the  large change in Joey Barton’s APM, and I will have to dig through the numbers to find out.

A look at the 31 players whose APMs decrease by 0.01 goals per 90 minutes is even more interesting:

For the large majority of players, a drop in APM by 0.01 goals per 90 minutes isn’t going to matter all that much; over a season with 2500 league minutes played the change in APM represents an impact of about -0.45 goals.  But there are a couple of players with significant changes in APM that moved them to opposite ends of the table.  Gareth Barry, who played for Manchester City in 2011-12, saw his rating drop from a mid-table position to the lower end of the APM table.  Armand Traoré, a left back for QPR, saw his rating drop by over half a goal per 90 minutes, which sent him almost to the bottom of the table.  Both players require further examination.

As I said in my previous post, it’s just one league season, so there is a lot of noise and multicollinearity that a Tikhonov regularization can’t reduce on its own.  It would be interesting and vital to examine how these ratings behave with two or three more years of match segment data.  As for the player expulsion model, it’s nice to have it so that I can say that I’ve accounted for expulsions, but the results don’t appear to say that it’s necessary for improved modeling.  We’ll just have to wait and see until we get more data.