Following on from my most recent post, I present league projections for the 2015-16 English Premier League.

A lot of people are visiting this site for the first time, so an explanation of these projections is in order.  These league projections are a combination of expected goal statistics based on statistical output in previous seasons and the current squad (thanks to Aaron Nielsen) and my Pythagorean projection of team records based on these goal statistics.

These expected goals statistics are not the same as expected goals (expG) so popular with many in the soccer analytics space at the moment.  They are entirely Aaron’s work that is part of what he’s done over the last 20 years, so if you have any issues with the goal totals, take it up with Aaron on Twitter.

At any rate, here is the expected Premier League table: 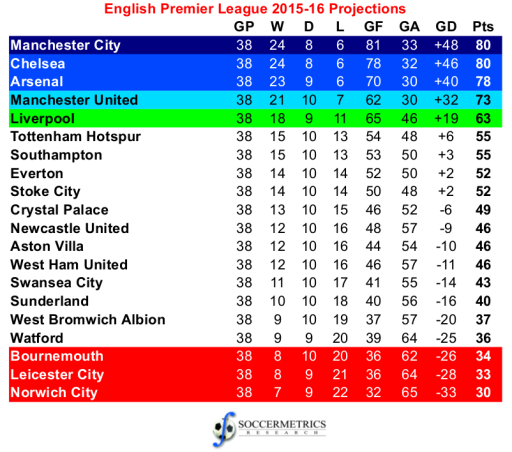 I should emphasize that Pythagorean projections are the expected point totals of an average team with identical goal statistics.  Naturally, teams at the top are better than average and teams at the bottom are much worse.  Quantifying that deviance from average isn’t something I’ve done for every team, so I’ll just run with the Pythagorean projection even though I readily admit that it needs adjusting.  I’ve learned from working with these projections in previous seasons that it’s best to view the table in terms of groups of teams within a 4-5 point radius of each other, which reflects the RMSE of the expectation, so that’s what I’ll do now.

I project that the Premier League title looks like a three-way fight between Manchester City, Chelsea, and Arsenal, but when I look at the squad changes of City, I’m not sure that I believe that they will hang in the top two.  I suppose that’s a topic of discussion with Aaron.  Manchester United looks like an outside contender for the title at best.

Liverpool appears to be in a group of its own: in an Europa League place, not expected to be a contender for the Champions League places, but not strongly threatened by clubs like Southampton or Spurs.

The next group seems to present contenders for a top-10 finish that surprise a lot of people.  This season the group includes Southampton, Spurs, Everton, Stoke City, and Crystal Palace.

Below this group of five are teams expected to finish in the lower half but in a region of safety.  They include Newcastle, Aston Villa, West Ham, and Swansea City.  It’s possible that the first three teams could challenge Crystal Palace for 10th or maybe a bit higher, but it doesn’t seem likely.

Now we get into the teams that will feel the heat of the relegation trapdoor.  I project that Norwich City, Leicester City, and Bournemouth face the greatest danger of a drop to the Championship.  It’s possible that Watford and West Brom could be drawn into the fight, and maybe Sunderland as well.  So yes, I do expect the promoted sides to be concerned with staying up for most if not all of the season, but at least one of those clubs will survive in the Premier League for at least another season.

So those are the preseason projections for 2015-16, and you’re invited to laugh at how far off they were come next May.