The 2015-16 European season is here, and it’s time to repeat a feature of the site: preseason league projection tables.  This post will feature projections for the Dutch Eredivisie which starts this weekend.

A lot of people are visiting this site for the first time, so an explanation of these projections is in order.  These league projections are a combination of expected goal statistics based on statistical output in previous seasons and the current squad (thanks to Aaron Nielsen) and my Pythagorean projection of team records based on these goal statistics.

I should point out that these expected goals statistics are not the same as expected goals (expG) so popular with many in the soccer analytics space at the moment.  They are entirely Aaron’s work that is part of what he’s done over the last 20 years, so if you have any issues with the goal totals, take it up with him on Twitter.

At any rate, here is the Eredivisie projected table: 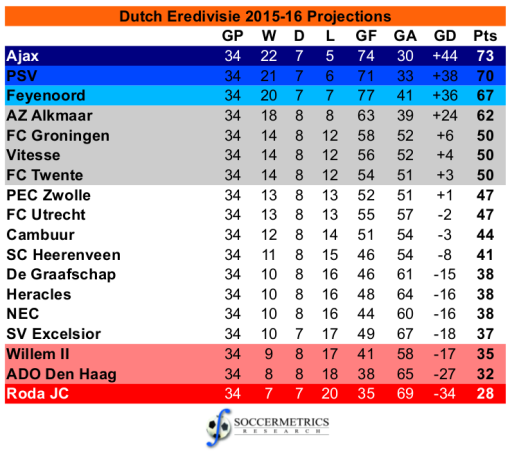 I should emphasize that Pythagorean projections are the expected point totals of an average team with identical goal statistics.  Naturally, teams at the top are better than average and teams at the bottom are much worse.  Quantifying that deviance from average isn’t something I’ve done for every team, so I’ll just run with the Pythagorean projection even though I readily admit that it needs adjusting.

As for the projected table, I’ve learned from previous seasons that it’s best to view the table in terms of groups of teams within a 4-5 point radius of each other, which reflects the RMSE of the expectation.  I expect the league title to be decided between Ajax, PSV, and maybe Feyenoord.  PSV were runaway winners of the Eredivisie last season but the loss of Depay, Rekik, and Wijnaldum may be too much to overcome this time.   AZ may have an outside chance of a direct berth into the Europa League qualifiers, but a solid place in the Eredivisie playoffs for Europe may be more realistic.

The next layer of clubs are Groningen, Vitesse, Twente, Zwolle, Utrecht, and maybe Cambuur.  These teams are expected to contend for the playoff spots for a Europa League playoff place, which translates to 4th to 7th in the league.

Below that group lie Heerenveen, De Graafschap, Heracles, NEC, and Excelsior.  They probably won’t be in the fight for a playoff spot, and they may have to look over their shoulder at the relegation playoff zone, but mid-table safety looks like a likely outcome for the season.  Cambuur could be part of this group as well.

The bottom group of teams in the table are Roda, Den Haag, and Willem II, and I expect those teams to struggle the most to avoid relegation.  Roda JC appears to be under greatest danger of dropping straight back down to Eerste Divisie, and Den Haag and Willem II could be in danger of finishing into a hellish relegation playoff.  The danger could extend to De Graafschap, Heracles, NEC, and Excelsior.