You are here: Home › League Competitions › The state of play entering final quarter of Superliga Argentina 2017/18 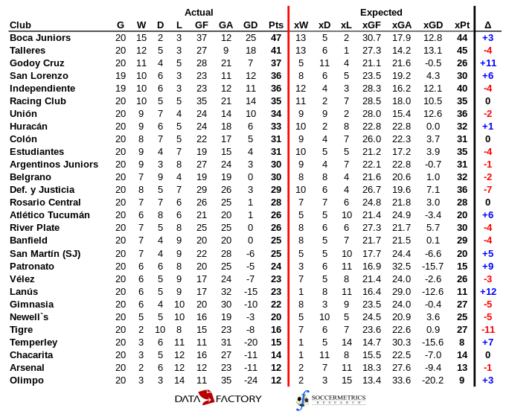 Actual and expected table for 2017-18 Superliga Argentina after Round 20. Data from DataFactory LatAm.

For most of the season, the biggest prizes and penalties at both ends of the Superliga table looked resolved.  That’s still true at the bottom of the table, but a small window of opportunity has opened up for a surprising challenger.  Here’s the state of play in the Superliga as I see it:

Boca Juniors have led the Superliga from the start and have been followed by a couple of traditional powers and a few surprises from Argentina’s Interior. (More than half of the clubs in the top flight are based in Buenos Aires proper or Buenos Aires province, with the rest scattered between city centers such as Rosario, Córdoba, and Mendoza or the hinterlands like San Juan, Entre Ríos, or Tucumán provinces.) San Lorenzo and Independiente looked like they would challenge Boca, while Unión, Talleres, and Colón raised doubts that they could maintain their challenge. As the season progressed, all of those challengers lost ground to Boca and fell away from the title challenge.  All but one: Talleres de Córdoba.

The gap between Talleres and Boca has remained steadily in a six-to-nine point range, which left Talleres in sixth after Round 10 but promoted to third by Round 14 and then second by Round 17.  This weekend will see Talleres travel to the Bombonera to face Boca in a championship six-pointer. A Talleres win would blow the title race wide open, while a Boca victory will kill off the chances of their last remaining challenger. A draw will preserve the status quo.

I have said on social media that the title remains Boca’s to lose, but perhaps it’s time for Talleres to be viewed as a serious challenger. They have the best defense in the Superliga based on actual and expected goals allowed, they have perhaps the best goalkeeper in the championship in Guido Herrera, and some able strikers in Junior Arias and Sebastián Palacios. Boca are the highest-scoring team in the top flight (actual and expected), but two key pieces of that attack won’t be in the lineup on Sunday. Darío Benedetto has been out for the last four months with a torn ACL, and Carlos Tévez picked up a calf injury while — allegedly — kicking the ball around during a prison visit (!!). Boca may be unsettled at the moment, having won one of their last three in the league and lost the Supercopa Argentina recently, but they have depth in midfield and up front than most teams in the division. I would not be surprised to see a cagey draw.

The rest of the schedule takes on a weird match-play like format for both teams as they play Independiente, Newell’s, Gimnasia, Unión, and Huracán on consecutive matchdays:

I see Independiente being the toughest remaining rival to both teams, so any points dropped would be significant in the title race. It’s possible that Boca bottles it and leaves the door ajar for Talleres to steal top spot or even force a playoff, but I don’t consider it very likely. It all depends on how quickly Tévez can return to Boca’s lineup. If my head were on the block, I would say that Boca wrap up the league title with one or two matches to spare.

The fight for Libertadores

Behind Boca Juniors and Talleres are Godoy Cruz and San Lorenzo in third and fourth, respectively, and Independiente in fifth place. The Reds are followed closely behind by rivals Racing, Unión, and Huracán.  The biggest surprise without any doubt is Godoy Cruz. They have been involved in several matches where they generated fewer chances, yet they took full advantage of those chances and won eleven more points than expected. One would think that Godoy Cruz are due for a reversion, but this is a side that greatly overperformed last season.

Of the teams outside the top five, the one that I see making the biggest push is Racing Club. They were well down the Superliga table in the first half of the season, but they have surged since then, going unbeaten in eight matches to approach within a point of their eternal rivals. Their defense could be a little better, but as long as Lautaro Martínez is on the field, Racing always have a chance. Unión and Huracán are hanging around the top five, but they are more on a downward trajectory than an upward one.

I believe Boca and Talleres are firm candidates for Libertadores next season, San Lorenzo have a good chance, and Godoy Cruz, Independiente, and Racing will fight for the remaining two places.

Argentina will have six berths for the 2019 Copa Sudamericana, for sixth through 11th place finishers in Superliga. Those places are occupied by Racing in sixth, followed by Unión, Huracán, Colón, Estudiantes, and Argentinos Juniors.

Racing have a strong chance of entering the Libertadores places, so it’s possible that Racing’s place in Sudamericana could be occupied by Godoy Cruz or Independiente.  As I wrote before, Unión and Huracán are on downward trajectories, but they are better than mid-table sides and should stabilize here. Colón and Estudiantes are Sudamericana-caliber sides and have better than average defenses, but Estudiantes’ lack of offensive firepower (Juan Otero Tovar excepted) is a bit worrying. Argentinos’ prime objective was safety, and a place in Copa Sudamericana would be gravy. Lucas Barrios gets a lot of attention, but Argentinos have gotten really good production from Nicolás González and Alexis MacAllister.

As far as teams on the outside looking in are concerned, Belgrano, Defensa y Justicia, Rosario Central, River Plate, and Banfield could contend for the bottom two or three places, but all of them are looking a bit inconsistent.

Relegation in Argentina’s leagues is decided by average points won per matches played in league tournaments over the previous three seasons (same division, of course). This system is due to be scrapped in 2020, so we’ll have to pull out our calculators and continue to do some long division in the meantime. Four teams go down this season as the top flight continues to shrink toward twenty teams (26 next season).

While it’s possible for mid-table teams to find themselves in relegation danger because of recent disastrous campaigns (see Atlético Rafaela last season, and River Plate in 2011), this season’s candidates for the drop have had conveniently poor records.  Temperley, newly promoted Chacarita Juniors, Arsenal de Sarandí, and Olimpo are bottom in points, near bottom in expected points, and bottom in the vital point average category.  It’s not a surprise to see Arsenal in the drop zone as they were a bottom four side last season and haven’t cracked 30 points in the last four tournaments.  Olimpo and Temperley saved themselves from relegation late last season and actually had decent mid-table performances. Temperley reverted to the mean in 2017/18, while Olimpo found it difficult to replace Fernando Coniglio’s goals and chance creation.

If my mathematics are right, Arsenal will be the first side to officially go down if they fail to defeat Chacarita this weekend and Patronato defeat Rosario Central. A win will merely postpone the inevitable; Patronato only need to win three more points to guarantee a superior points average against Arsenal. Two more points by Vélez and Tigre would ensure that they would have higher averages than Arsenal. I’m very confident that Arsenal will play in B Nacional in 2018/19.

I’m fairly confident that Temperley and Olimpo will go down to B.  If both sides run the rest of the table, their point-per-game averages will be 1.155 for Temperley and 1.165 for Olimpo. Those averages would draw Huracán and San Martín de San Juan into the relegation fight, but they only need a win in their next seven matches to be safe (Huracán need four points, San Martín SJ need three). Patronato, Vélez, and Tigre need eight points to ensure Superliga status in 2018/19.

The only side of the four that appears to have a theoretical chance of staying up is Chacarita Juniors. Three of their last seven matches are against direct rivals for relegation, but three consecutive matchdays will be against sides contending for the South American cups (Estudiantes away, Colón at home, and San Lorenzo away). Eighteen points from their last seven matches (1.185 point average) would give the Funebreros a chance if their rivals outside the drop zone implode, but that requires an unbeaten record in the closing matches. In other words, we need to see a level of performance from Chacarita that we have not seen so far in the championship. It could happen, but now that I see the schedule in front of them, I would consider it very doubtful.

So the relegation zone currently contains Arsenal, Chacarita, Temperley, and Olimpo and that is how I see it at the finish.