The 2017/18 Argentine Superliga is now in its summer/holiday break, which is much shorter than the summer breaks in the past. (The league competition restarts on January 28.)  It’s a convenient moment to take a look at the performance of the managers in the current tournament.

There have been 41 different managers in the Superliga, of which three were caretakers while a permanent manager was sought.  Seventeen managers were in charge for all league matches of their contracted club (Ricardo Caruso Lombardi left Tigre after Round 12), and 11 clubs have hired multiple managers during the first half of the season.

The figure below presents a summary of manager performance — wins, draws, losses, points per game, and expected goals scored and allowed. 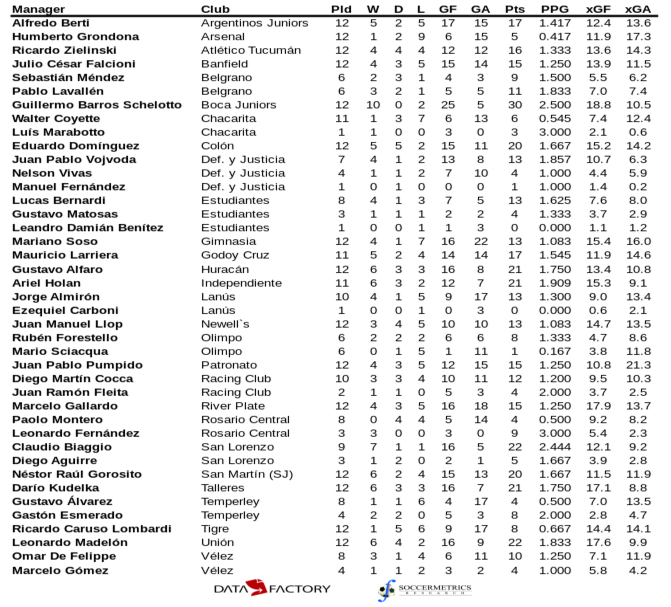 It shouldn’t be surprising that Guillermo Barros Schelotto has the highest points-per-game among all managers.  His Boca Juniors are leading the championship and are strong candidates to repeat as champions.  But second place in terms of PPG — restricted to managers with seven matches for their club — is occupied by Claudio Biaggio, who replaced Diego Aguirre at San Lorenzo and has led the Saints to second place in the Superliga table.  The managers of the two big surprises of this season’s championship, Darío Kudelka of Talleres and Leonardo Madelón of Unión, deserve special attention.  Their sides won at least 1.75 points per game and allowed the fewest scoring chances per game (0.73 xG/game by Kudelka’s sides, and 0.82 xG/game by Madelón’s).  Aside from Schelotto, no other manager was in charge of teams with better xG differential per match.

On the other side of the table, the managers located in the bottom five of xG differential per game and points per game are the ones that you would expect: Humberto Grondona (Arsenal), Walter Coyette (Chacarita), Omar De Felippe (Vélez), Gustavo Álvarez (Temperley), and Juan Pablo Pumpido (Patronato).  Three of the five — Coyette, De Felippe, and Álvarez — have since left their posts; it would not be a surprise to see Grondona or Pumpido, whose sides are in grave danger of relegation, follow them in the second half of the season.

The manager performance data is stored in the ProjectData repository on Github.