You are here: Home › Draft Analytics › Football Business Analytics › Getting there is half the battle: Draft class longevity at MLS clubs

How long does a MLS club’s draft class stick around?

It is one thing to be drafted by a Major League Soccer team.  In recent years, that honor has been extended to somewhere between sixty and eighty (mostly) college soccer players every January.

It is another manner for a drafted player to make it onto a MLS roster and enter the field of play for a MLS league match.  Over the 20-year history of the league, just over half of players drafted have appeared in a league match, even if just for one minute.

To be sure, being drafted by a MLS team and making the team are major achievements.  The real battle is the fight to stay on a club roster and remain on the pitch.  On average, within four seasons half of a year’s draft class is out of MLS.

That last figure shows how long a cohort of draftees remains in Major League Soccer as a whole.  But let’s drill down to the individual clubs.  How long do those draft classes stay with their original teams?  The thinking is that MLS clubs — and NFL teams and NBA teams and MLB teams and NHL teams — are drafting players who they believe will benefit them, not merely the league as a whole.

To answer this question, I used a local regression (lowess) plot to calculate the median number of seasons that the members of a team’s draft class remained with their original team.  I considered players drafted in the College and SuperDrafts between 1997 and 2013.  The data was time-shifted so that they all fell on the same axis (0 = year of draft, 1, 2, 3 = seasons after draft), and the data was produced to fit the plot, from which the expected proportion of the draft class to receive a league contract (year 0) and the number of seasons to for the proportion of the class to reach half that of year 0 are calculated.

The below plot shows the median draft class longevity for the league teams in drafts between 1997 and 2013.  If you don’t see your team, that’s because there wasn’t enough data to calculate a median value (Portland, Seattle, Montreal, NYCFC, Orlando City). 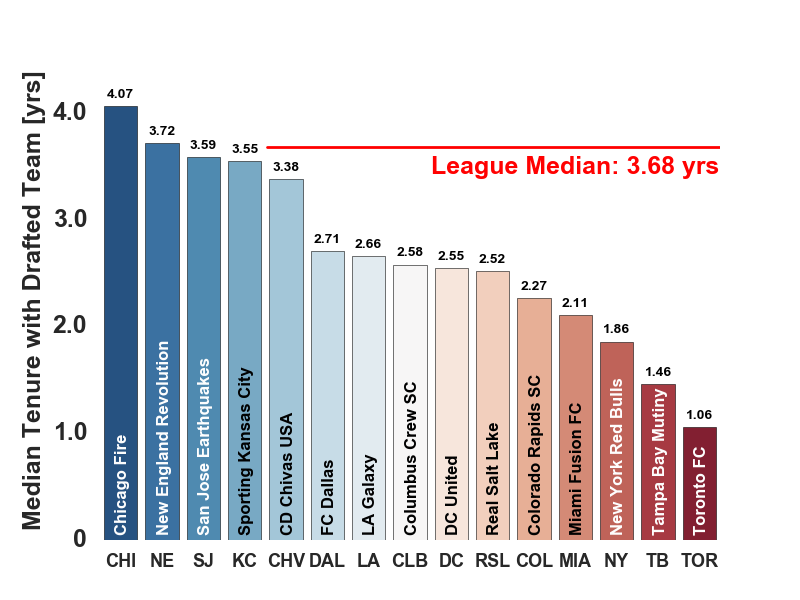 Median tenure of the draft classes of MLS clubs, over College/SuperDrafts during 1997-2013.

Keeping in mind that these figures only consider the subset of draftees given a contract, they throw up something interesting.  Sporting Kansas City (ex-Kansas City Wizards) had one of the highest draft mortality rates in the league, but the players who do stay remain at the club the longest.  Chicago Fire’s draft classes stay at the club the longest, followed by New England Revolution.  It is interesting to see that most of the clubs in this list see about half of their draft classes leave within 2.5 years, and three see their draft class turn over within two seasons.  Toronto FC’s draft classes would only last a season or two at the most, but this was back in 2013, and it seems that the club ownership has recognized the situation that they were in and made significant changes since then.

From the player’s perspective, it is an accomplishment to be drafted, to make the roster, and to play.  But it is a greater accomplishment to stay on that roster and keep playing.  From the front office perspective, one has to wonder constant turnover in the squad is a good thing, even with the reduced proportion of drafted players in the league.