You are here: Home › Football Business Analytics › How long does a MLS draft class last?

This MLS data set that I’ve built over the past year enables a lot of neat research projects on topics such as on-field performance, finance, and demography, among several others.  In this post I focus on a demographic topic — how long does a MLS draft class last?

To illustrate the presence of a MLS draft class in subsequent seasons, I plot the proportion of the original class that is involved in a MLS league match during a season.  If you’re on the pitch for a minute, you’re involved in a league match.  The class is made up of all of the players who were selected in pre-season player drafts.  (MLS did allow players to enter the draft multiple times until 2002.)  Below is the figure of the draft class presence plotted with respect to years after selection (Year 0 represents the draft year). 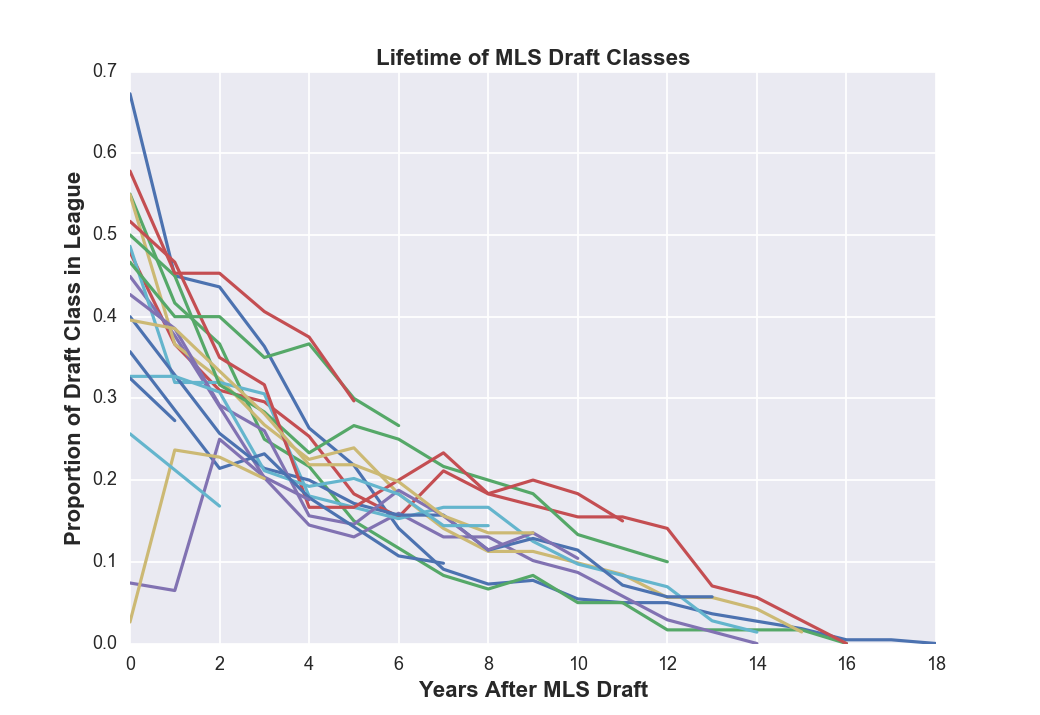 Now, I didn’t include a legend because I wanted to focus more on the trends in the draft class than in specific years.  (That will come later.)  I do find it interesting that with a couple of exceptions, the normalized participation of draft classes in MLS follows a common pattern.  The two exceptions were the draft classes of 2011 and 2012, which saw very few draftees — eight and three, respectively — get playing time in league play.  Most of those who would see play in MLS did so by the end of their third year, which matches up well with historic trends.

The trend looks like a negative natural log relationship, so I applied a curve fit to the data.  (I shifted the x-axis so that the draft year is year 1 in order to keep the log function from blowing up.)  The result is in the figure below — the solid line represents the maximum likelihood of the curve, and the lightly shaded areas represent the confidence intervals. 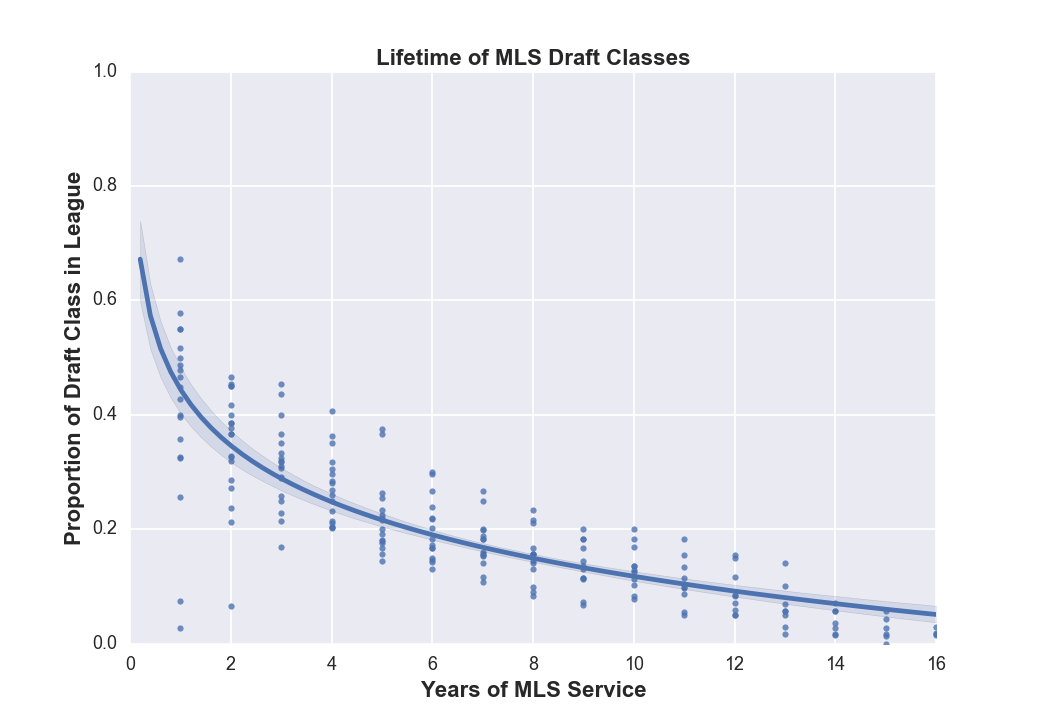 It looks like a log relationship is a good choice — it represents the middle range of the x-axis very well and a little less so at the end points, which is to be expected.  I can use the fitted curve to back out a rough estimate of a draft class’ median length, which will be nothing more than eyeballing the curve coordinates.  At Year 1 of MLS service, the expected proportion of the draft class in league matches is about 0.45, so we look for x-coordinate where half of that proportion remains in the league (0.225).  The curve reaches this proportion at about 4.75 years of MLS service.

So if I were to estimate the expected lifetime of a typical MLS draft class, I would expect that about half of the class that played in the league their rookie season would remain in the league by the end of their fourth year.  In the days where a majority of players in the league were drafted, perhaps that meant a significant roster overhaul every 4-6 years.  It may still be necessary in the present environment of Designated/Homegrown players and expanded foreign signings.

This study is leading up to a more sophisticated study of generations in Major League Soccer, but that will have to wait for the other side of CASSIS, and perhaps some familiarization with demography research.