You are here: Home › Expected Goals › A look at Argentina’s Primera after Round 21: A three-way battle for the title

Argentina’s Primera División championship has entered the final third of the season, and Boca Juniors — who have led for much of the tournament — now find themselves in a three-way scrap for the title.  And it is not inconceivable that three or even four other sides will join the fight.

Below is an enlarged league table of Primera after 21 rounds.  The first section shows the table based on actual match results; the second shows the table based on expected goals in all league matches, using a draw threshold of 0.4 goals. The expected goal numbers look a little different from last week because I noticed that my database had not recorded penalty goals correctly.  I re-pulled the data and verified that penalty events are tracked correctly.

(For an explanation of my version of the expected goals model, consult this post.) 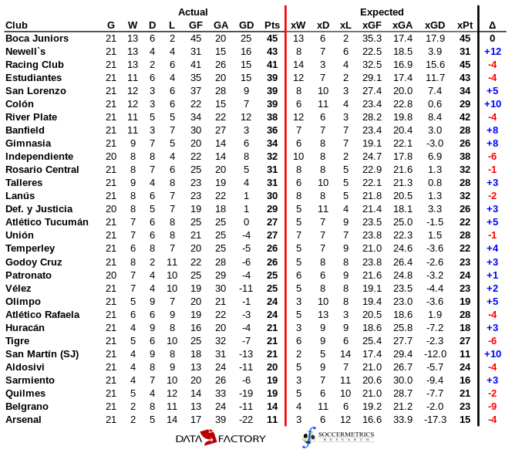 At this stage the championship can be summarized by the consistent performance of Boca Juniors (recent hiccups aside), the underperformance of Racing Club, and the strong overperformances of Newell’s Old Boys and Colón de Santa Fe.  Racing’s less than expected performance is more apparent if you look at the difference between their home and away form: other than Unión de Santa Fe, no other team in the championship has such a difference between home and away expected goals (20.44 and 12.07, respectively).  Newell’s achieves about 8.3 fewer expected goals on the road than at home, and Colón creates 2.5 fewer expected goals at home than away.

Here’s how the expected goal performances break down for each club between home and away: 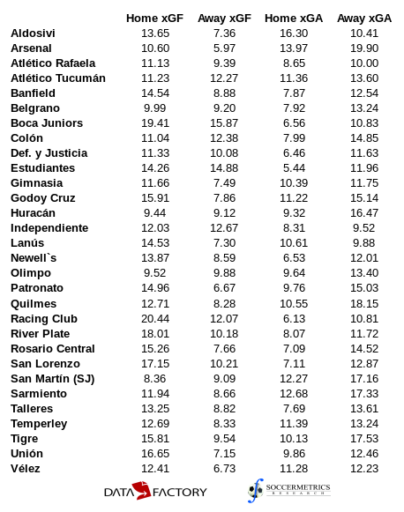 Home and away expected goal performance of each team in Primera División Argentina 2016/17. Data sourced from Datafactory LatAm.

At the other end of the table, Arsenal (Sarandí) remain mired at the bottom, San Martín de San Juan defy gravity with their performances (a win, a loss, and four scoreless draws in their last six matches), and Aldosivi find themselves drawn in the relegation trap.  Aldosivi have a better away xGA (16.30) than all but three clubs in Primera (Independiente, Atlético Rafaela, and Lanús), but a worse home xGA (16.30) than any other side by a wide margin.  No wonder manager Darío Franco is worrying about the sack.