Some, maybe most or even all, MLS teams use some sort of cheat sheet to help them make decisions on possible deals during MLS SuperDraft day.  One of those cheat sheets is the draft value card that provides a rough estimate of the relative value of a draft pick.

As you know, I’ve written several articles that summarize my research into draft pick valuation from the performance of previously selected players. I’m using that research to create a draft value card for the 2018 MLS SuperDraft.  Here it is below. 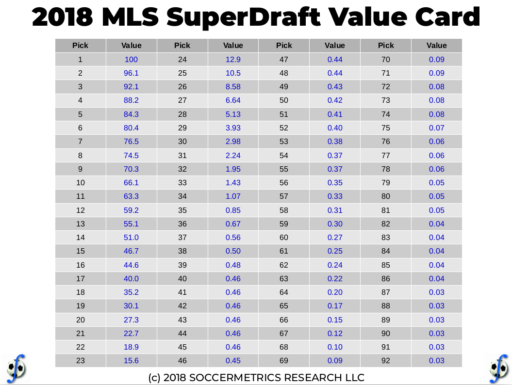 Relative values of draft position in the 2018 MLS SuperDraft.

The values are expected career values of players selected at each draft position, taking into account performance of players drafted in the previous four seasons. The values are then scaled so that the top draft pick is 100.0.

At any rate, it will be interesting to see if the teams see the draft values in the same way as these estimates.