You are here: Home › Draft Analytics › Which MLS teams have dominated recent drafts? It’s too soon to tell, but we’ll examine anyway

This week is the week of the MLS SuperDraft in Philadelphia, and I am on my way there to attend an analytics symposium sponsored by Opta. One of the talks at the symposium will be a presentation by Kevin Minkus on the use of data to make draft selections.  Last year I wrote extensively on a history of draft pick value in Major League Soccer (part 1 and part 2), so perhaps it is a good time to look back at previous drafts and use player performance data to infer which teams have drafted well and which ones have drafted poorly.

I’ve written about the draft valuation models in part 1 of my draft pick value posts (scroll down to the “Valuation Models” section), so I’m not going to repeat myself too much.  Draft pick models relate the draft position to the expected career value of the selected player. How you calculate “career value” is up to you, but it must be consistent.  I used a simple valuation metric that used basic performance data that is available over the entire history of MLS. I also created what I called a “Club” model which related draft position to the expected value of the player over his tenure with the team that drafted him. The expectation is that clubs want to draft players who will create value for them immediately, not in five or six years when they are (likely) somewhere else.

In part 2 of my draft pick value posts, I calculated the draft performance rating of all draft selections made between 1997 and 2013 from the club perspective.  If one views the draft as an opportunity to select players who will make the most contributions to the club, one sees a cluster of three clubs that have done this very well: Chicago Fire, LA Galaxy, and Sporting Kansas City (ex-Kansas City Wizards). 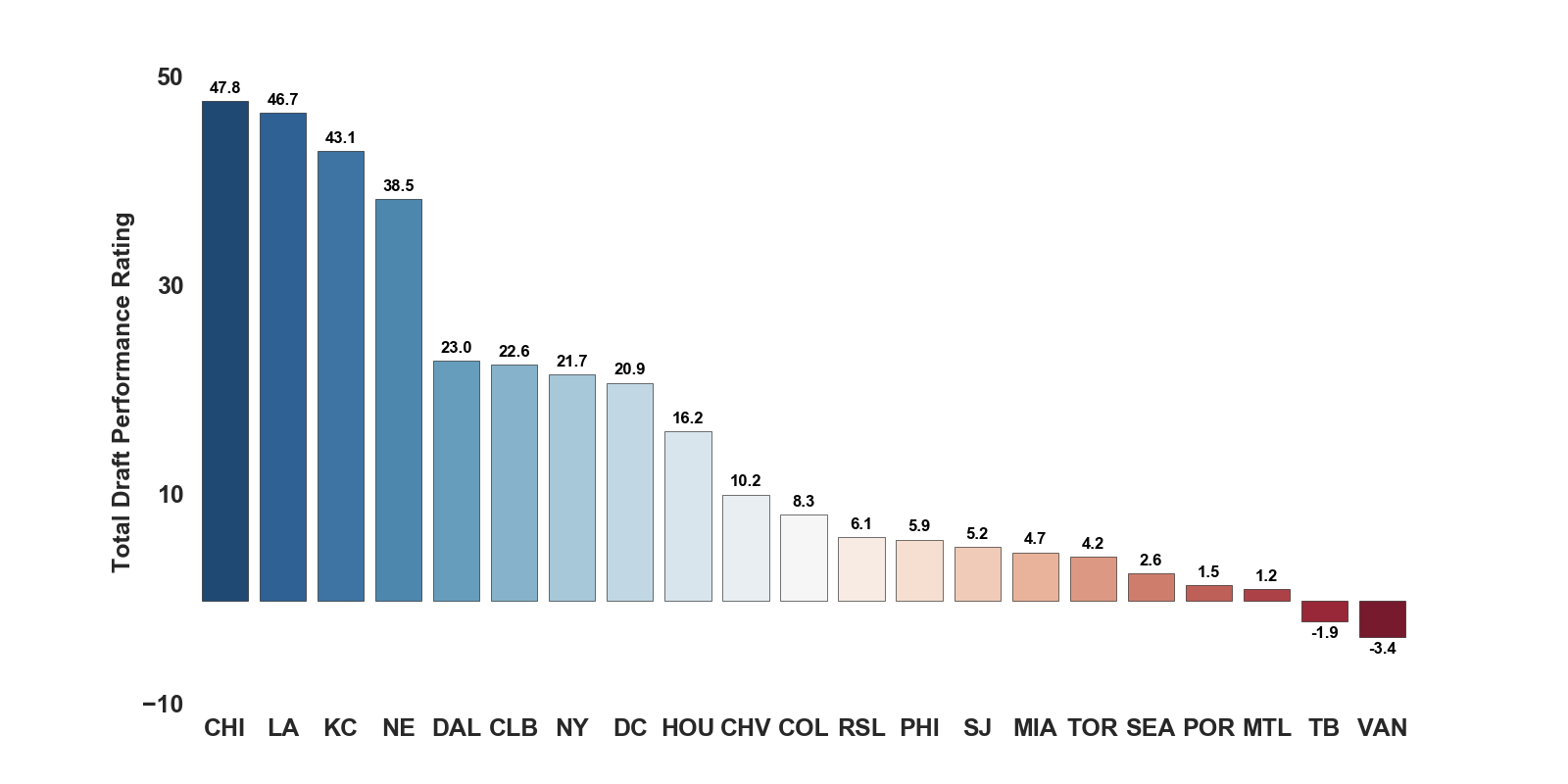 If we look at the 2006-12 period, which covers the Designated Player era, the same three clubs — Kansas City, LA Galaxy, and Chicago — are at the top of the list. (Miami and Tampa Bay had already been contracted four years earlier, and Montreal had not yet entered the league.) There is significant movement of the teams outside of the top three; Dallas’ and Chivas USA’s draft performance ratings were just barely ahead of expectations during this period. In fact, more than 80% of Chivas USA’s draft overperformance came from two draft years — 2005 and 2006 — in which the club drafted Brad Guzan, Sacha Kljestan, and Jonathan Bornstein.

Cumulative draft performance rating of all MLS teams participating in SuperDrafts between 2006-2012. Calculated at end of 2017 MLS regular season.

If we look at the period between 2012 and 2017, we see very dramatic changes in the ratings and the teams at both end of the list. The draft performance ratings are negative for most teams, not necessarily because most teams underperformed in the draft, but because it is too soon to tell whether the draft selection was a success or a bust. We see a significant overperformance by Colorado in the draft (thanks to selections of Dillon Powers, Jared Watts, and Dominique Badji), some modest overperformance by Philadelphia, DC United, FC Dallas, and Seattle, and a broad middle of draft performance in line with expectations or a little negative.

Cumulative draft performance rating of all MLS teams participating in SuperDrafts between 2012-2017. Calculated at end of 2017 MLS regular season.

It’s way too premature to calculate draft performance for the 2017 draft class, but I’ll do it anyway.  Most draftees have yet to appear in a league match, so most of the team performance ratings will be negative. Philadelphia Union’s total rating was the only positive rating of all MLS teams thanks entirely to the Jack Elliott pick. Selected late in the fourth round, he earned his place into the starting lineup, held it for most of the season (only lost it due to injury), and finished third in the balloting for MLS Rookie of the Year.  So why was Atlanta United’s draft performance rating so negative despite having a Rookie of the Year winner? Their other first-round selection, Miles Robinson, didn’t play a minute in the league last season.  The other selections aside from Julian Gressel didn’t appear either, but they weren’t expected to do so anyway. One other thing that I’m fairly sure that I’ve read about but have just noticed is that the LA Galaxy is missing entirely from the SuperDraft.  They traded away their draft picks for player acquisitions and passed on their lone fourth-round selection.  Whether that becomes a strategy among other teams that want to prioritize their academy will depend, of course, on results.

I’ve written before that the expected lifespan of a draft class with the original club is close to three years, so it will take a couple of years to see which clubs got the most from their 2017 draft classes. It does appear that the Galaxy, who have dominated the draft historically, have transitioned away from it. Who will dominate the draft in this new (and maybe final?) era remains to be seen.