You are here: Home › Conferences and Symposia › A look back at the OptaPro Analytics Forum

Last week I had the privilege of attending the OptaPro Analytics Forum in London.  It was organized by OptaPro, Opta Sports’ professional services organization, with the objective of bringing together in one room a select group of football analytics researchers and performance analysts and other officials from the professional football clubs which use Opta data services.  The Senate House at Birkbeck, University of London was the venue for the day-long conference, and approximately 50 people attended. 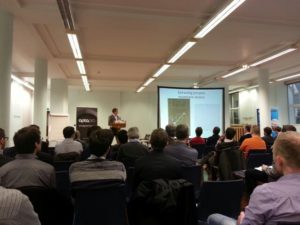 A quick summary of the Analytics Forum: in November OptaPro made a Call For Proposals of research projects that would make use of its technical/tactical data sets.  (Researchers could use their own data sets as well but this was not required.)  A panel of judges — Ian Graham, Blake Wooster, Chris Anderson, Sam Green, and Devin Pleuler — evaluated the proposals using a blind process and a final group would be given access to Opta data and invitations to present their work.  As it were, almost 60 proposals were evaluated and nine projects were selected.  The time between final selection and the presentations was six weeks, and Opta’s F24 data feed is not the easiest to parse, so I feared that there wouldn’t be much to present for many of the presenters.

Fortunately, my fears were misplaced.  The presenters, to a person, took pains to point out that their work was very much in progress and results were preliminary; nevertheless, the content of the presentations was of excellent quality.  (The quality of the presentations themselves was all over the map, but in general analytical people tend to make their presentations more functional than beautiful.) 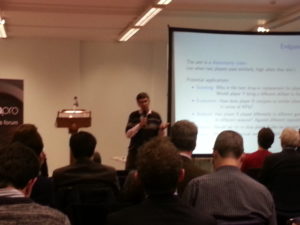 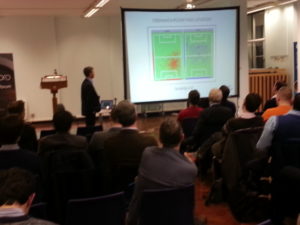 In my opinion, these were the main themes of the conference: 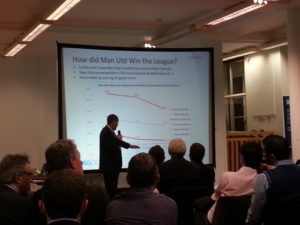 I really did like all of the presentations at the conference, but if I were forced to choose, these would be my top four:

You might be hearing about some of them on future Soccermetrics Podcasts. 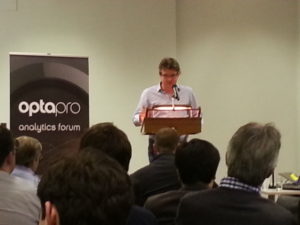 In my view, the OptaPro Analytics Forum is the best soccer analytics conference since the 2011 NESSIS.  It’s the kind of event that I’ve been waiting to see, and it’s significant that it was held in London.  It was a pleasure to meet those of you who attended the conference at University of London, and I really hope that it becomes an annual event.