You are here: Home › Conferences and Symposia › 2013 SSAC Review: The rest of the experience

There is a lot going on at and around the MIT Sloan Sports Analytics Conference — sessions, demos, launches, and of course, parties.  Lots of parties.  I went to the Soccer Analytics gathering at McGreevy’s in downtown Boston last Thursday night and spent a wonderful evening talking shop with people working in the field or enthusiasts about the field: 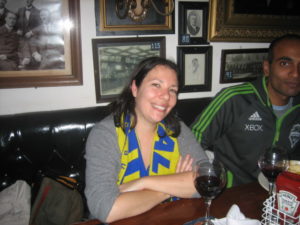 Sarah Rudd (OnFooty/StatDNA), without whom this meetup wouldn’t have been possible. 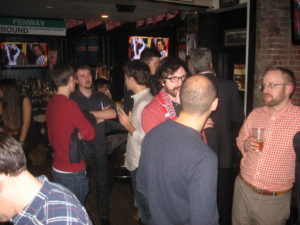 Part of the crowd at the Sports Analytics meetup.

I’d like to be able to make interesting remarks about the sport analytics panels at the Conference, but to be honest, I can’t because I spent much of the conference in the corridors meeting people.  If you’re looking for those insights, there are plenty of places to go such as Mitch Lasky, Zach Slaton, Joe Posnanski, and ESPN Daily Dime (Day 1 and Day 2).  If you want an idea of how the SSAC has transformed from a lightly-organized affair to a slick, almost corporate production, you must read Kevin Arnovitz’s piece at TrueHoop.

The sessions that I did got out of my way to attend were the Research Paper finalists and the Evolution of Sport presentations.  It’s not too surprising that I would attend the Research Paper presentations given my analytical background, but there were some EOS talks that were interesting and not as far-fetched as I originally thought.

Nevertheless, my priority was to roam the halls, talk to select exhibitors, and have meetings (scheduled or impromptu) with colleagues and prospects.  The greatest value of these conferences is the serendipity, those chance meetings with people that will change your life.  It was true for me last year as I ended up meeting a future advisor and an investor.  This year I reconnected with a former graduate school colleague who is now a professor, had an extended conversation with one of my recent hires, and got invited to a sponsor’s party.  So it’s very frustrating that the SSAC has made it so difficult to make those serendipitous moments possible.

What do I mean?  Here is a photo of my nametag from the Sloan conference, taken from 18 inches away: 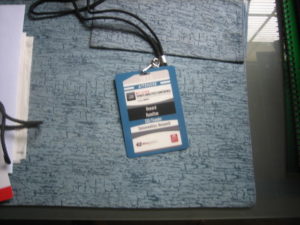 And here is my nametag from Startup Riot, an entrepreneur-oriented conference in Atlanta that I attended the week before: 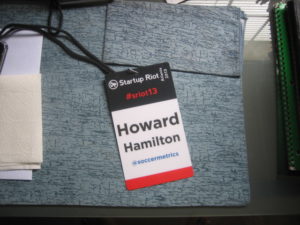 My nametag at Startup Riot

Which nametag can you see from a foot away?  Which one doesn’t require you to have either 20/10 vision or lean forward into someone else’s space?  And would you feel comfortable doing the latter in order to identify some famous person who you’ve wanted to introduce yourself to?

There were a number of people at the conference who I had only known via LinkedIn or Twitter and wanted to meet in person, but never did because that chance meeting in the halls never happened.  And it was even less likely to happen if you had to be within six inches of a person’s chest to identify him (or her, but you’d never make it that far without getting slapped).

This gets into another complaint about the conference: the attendee list wasn’t made available until I checked-in at the conference.  As a result there were people who I wanted to meet who I couldn’t contact at the conference and could only hope to meet by chance (which is more difficult with the nametags on display).  Other conferences, such as the Leaders Sports Summit, not only makes the attendees list available to registered attendees, they also facilitate introductions between interested parties.  The SSAC is becoming more of a sports business conference, so why can’t they make it easier to people to do business?

At the end of every conference, I take a step back and ask myself if the conference is worth my time and money to attend, in terms of technical knowledge gained, contacts made, ideas generated, or sales made.  I was starting to have doubts about the SSAC over the last two years as the price to attend continued to climb, but I still conclude that I need to be at this conference.  The opportunities for cross-pollination are much greater here than at any sports conference, and even though the SSAC is becoming less “geeky”, the level of analytics discourse is higher there than at any other sports conference of its size.  (NESSIS and NCSSORS are very technical, but only 50-80 people attend them.)  It is still value for my money, and I hope to attend and participate as long as I can.