Continuing from my previous post, here is the list of expected saves and goals allowed for all the teams in Argentina’s Primera División 2016-17. Own goals have been ignored, but penalties have not.  There may be some discrepancies between the total shots on goal as calculated by DataFactory and by me. 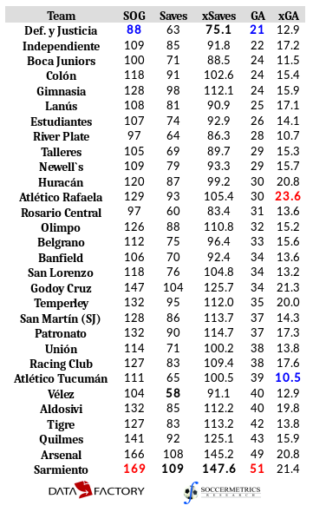 The total expected goals allowed over all the teams is about half that of the actual goals allowed, which makes for significant differences between actual and expected figures.  Independiente had the smallest gap between actual and expected goals allowed (-4.8 goal difference), while Sarmiento had the largest (-29.6 goal difference).  Atlético Tucumán had the lowest xGA in the division, much lower than champions Boca or teams that finished in the Libertadores places, but received many more goals. Rafaela, who were relegated, had the greatest xGA in Primera but the gap to their reality was not that great.  Perhaps a lack of goalscoring was to blame for their drop to B Nacional.

As I wrote in my previous post, I don’t like the fact that the total expected goals allowed is so small, so I’m going to refine the model to see if I get better results. I do expect the trends of the results to remain the same.