My previous post presented my Expected Saves model, and I thank everyone for the response and interest when I tweeted it a few days ago.  In this post I’ll apply this model to goalkeeper performance in the previous Primera División championship in Argentina.

This analysis takes DataFactory’s match event data from the tournament and calculates expected saves and eventually expected goals allowed for every goalkeeper who participated in the championship.  I’ve focused on the 33 ‘keepers who appeared for more than 80000 seconds, or 1333 minutes, in league matches this season. 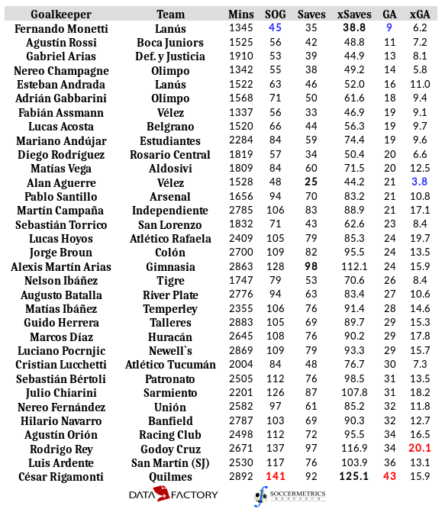 One thing that jumps out upon initial inspection is the high number of expected saves, which results in a low number of expected goals allowed.  It’s possible that using saves as the response variable in the model may not the best choice; there will always be much more successful saves than unsuccessful ones, and classification models work best when they attempt to identify the “anomalies”, which are the goals in this case.  It’s something to think about and I’ll revisit this choice in a future post.  The total number of goals allowed is actually much larger than that predicted by a compliment of the xG model.

There are some interesting results revealed in this table.  The goalkeeper with the fewest goals allowed was Fernando Monetti of Lanús, who was their #1 ‘keeper during the first half of the championship but managed to tear his ACL playing football-tennis during summer vacation.  His replacement ‘keeper, Esteban Andrada, played very well, especially in their final league match. Agustín Rossi (Boca) and Gabriel Arias (Defensa y Justicia) were the first-choice ‘keepers for their respective teams but faced few shots and let in fewer goals.  At the other end of the table, poor César Rigamonti of Quilmes was bombarded throughout the tournament, and his goalkeeping statistics were impacted as a result.  Alan Aguerre of Vélez had the lowest expected goals allowed, but let in almost 19 more goals than expected.

So what do the gaps between expected and reality look like, and what are the averages over 90 minutes?  The following chart displays those figures, own goals ignored. 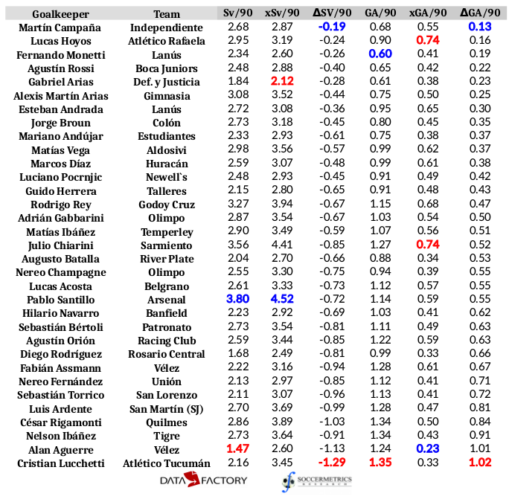 Expressing the expected and actual amounts per 90 minutes reveals some more interesting results.  We see Martín Campaña of Independiente at the top of the list with the smallest differences between actual and expected saves and goals allowed.  Following him is Lucas Hoyos of relegated Atlético Rafaela, who allowed significantly more goals per 90 minutes than Campaña but not much more than expected. All of the goalkeepers made fewer saves than expected and allowed more goals than expected, but the better ones (or at least, some of the higher-rated ‘keepers in the media) such as Monetti, Rossi, and Gabriel Arias have low amounts of expected goals allowed and smaller gaps between expected and reality.  At the bottom of the list you see ‘keepers such as Aguerre and Lucchetti, who appeared to be good for missing an achievable save and letting past a savable goal per game.