Before the World Cup I posted expected goal maps of all of this season’s Copa Libertadores matches, from the preliminary rounds to the group stage, to the Soccermetrics Pictures Twitter feed. Now that the World Cup is over and Libertadores is set to resume next week, it’s time to take a statistical look at the tournament as played so far.

The tournament up to now

Forty-seven clubs from the ten CONMEBOL national associations have participated in this season’s Copa Libertadores, of which 28 entered the group stage directly and 19 sides played two or three rounds of preliminary ties to determine the last four group stage participants. None of the teams in the first preliminary round — Olimpia (Paraguay), Universitario (Peru), Montevideo Wanderers (Uruguay), Deportivo Táchira (Venezuela), Oriente Petrolero (Bolivia), and Macará (Ecuador) — advanced to the group stage.

Argentina and Brazil were guaranteed six sides in the group stage this season thanks to their clubs winning last season’s CONMEBOL competitions, and another Brazilian side advanced out of the preliminary rounds when Vasco da Gama overcame Bolivia’s Jorge Wilstermann on penalties. As for the other CONMEBOL associations, only Colombia and Uruguay saw more than their allotted minimum of clubs in the group stage.

Argentine and Brazilian dominance continued into the round of 16. Six of the seven Brazilian representatives in the group stage advanced, and all but one won their respective groups. All six Argentine sides advanced from the group phase, but all but one side finished second in their groups. The top two Paraguayan sides in their domestic championship last season advanced to the last 16 of the Libertadores. The remainder of the field was filled by Chilean and Colombian representatives.

Expected Goals expressed as an average over 90 minutes has a strong relationship with a team’s likelihood of advancing from the Copa Libertadores group stage. Such a pattern can be observed for offensive xG/90 but is even more apparent for defensive xG/90. The two tables below display shots, goals, and expected goals from offensive and defensive perspectives. 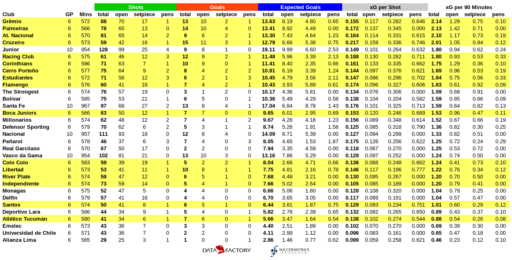 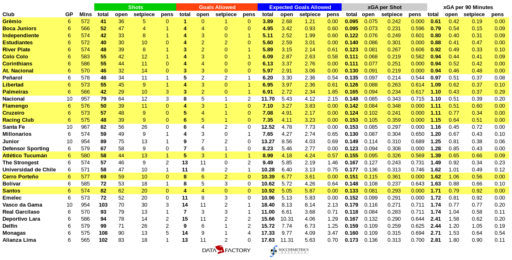 Ten of the fifteen sides with the highest xG/90 qualified for the round of 16 of the tournament (1.53-2.14 xG/90), and 13 of the fifteen sides with lowest xGA/90 advanced to the last 16 (0.61 – 1.15 xGA/90). There was a cluster of four clubs — Colo Colo, Libertad, River Plate, and Independiente — that generated 1.20-1.24 xG/90, which was less than that of ten clubs that were eliminated in the group stage.  The difference for those four sides was that all of them were among the ten best defensive xG records in the group stage.

Expected goals also explained some of the story for those sides eliminated at the group stage. Some sides were prodigiously profligate in front of goal (Júnior, The Strongest, and Real Garcilaso), others were anemic (Universidad de Chile, Emelec, and Deportivo Lara), a few others had defenses like sieves (Vasco da Gama, Delfín), and a select few were bad on both ends of the field (Alianza Lima).  Between Alianza and Real Garcilaso providing limp resistance, and Universitario crashing out of the first preliminary round, this has been a disgraceful Copa Libertadores for Peruvian club sides and a photographic negative to the Peruvian national team’s positive play at the FIFA World Cup, results notwithstanding.

Summary of offensive and defensive xG/90 minutes of all participants in group stage of 2018 CONMEBOL Copa Libertadores. Teams advancing to knockout stage are highlighted in yellow. Data supplied by DataFactory LatAm.

Copa Libertadores has thrown up some surprising finalists and winners this decade — Atlético Nacional won it a couple of seasons ago, and club sides from Ecuador, Paraguay, and Mexico have advanced to the final. But the competition remains the fiefdom of the Argentine and Brazilian representatives, and Brazilian sides have a tighter grip on the competition than ever before. With no Liga MX in Libertadores, Brazilian clubs have no rival for acquisition of the best of South American talent that desires to play in the competition. Colombian sides can make inroads in the competition, but still trail the big two countries by some distance. Following the Colombians are the clubs from Chile, Uruguay, and Paraguay. There is a small overlap between the Bolivian representatives and the weaker Brazilian/Argentine sides, but the latter sides will always have a better chance of advancing from their groups. Propping up the hierarchy are the Ecuadorean, Peruvian, and Venezuelan teams.

There are four sides whose performances in terms of xG don’t appear to match their actual results: Santa Fe, Cerro Porteño, Santos, and Atlético Tucumán. 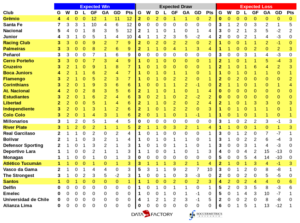 Breakdown of actual results in 2018 CONMEBOL Copa Libertadores by expected outcome according to xG. Wins are defined by xG difference greater than 0.4. Data supplied by DataFactory LatAm.

Colombian side Santa Fe had the second-best xGD of any side that didn’t advance out of the group stage (Júnior de Barranquilla). But their record in the competition is a bit of a misnomer when it comes to the group phase. It is true that Santa Fe had seven matches in which they generated significantly more xG than their opponents. Three of those expected wins occurred in the preliminary rounds, and Santa Fe won two of those. Of the four expected wins in the group phase, Santa Fe won only one, while drawing two and losing the other. A 1.25 points-per-game average over those matches is simply not sufficient to advance from the group stage.

Paraguayan side Cerro Porteño advanced to the group stage behind Grêmio in Group A despite an xGA/90 (1.62) in the lower third of all group stage participants. That figure is wholly explained by Grêmio routing Cerro 5-0 in matchday 3. If one puts that result aside, Cerro would have generated 10.2 xG and allowed 6.99 xGA over 483 minutes of group play, which translates to 1.90 xG/90 and 1.30 xGA/90.  It would still be a very high xGA/90, but the xGD would be +0.60 instead of +0.07.

Brazil’s Santos had expected goal statistics in the bottom quarter of the group stage, and its actual goals totals are not much better (6 goals scored, 4 goals allowed). However, they allowed the most attempts from set plays (20) without resulting in a goal scored. Was it luck, or was it a goalkeeper consistently playing on his head?  It’s hard to say right now without further analysis of expected saves and goals allowed. What is known is that Santos had four matches in which they had significantly fewer scoring chances than their opponent, and they won two of them (Santos 3 Nacional 1, Estudiantes 0 Nacional 1), more than any other participant in the group stage.

Atlético Tucumán is probably the most difficult side to explain. They generated the least xG/90 of any round of 16 participant and allowed the third-worst xGA/90, which does not appear to be a great combination. Only one of their six group matches was an expected win (which they actually did win 1-0), but of the five matches that they were expected to draw or lose, Atlético Tucumán took seven points of a possible 15. All of the other Libertadores sides that took seven points or more from those positions advanced to the round of 16.

Who is likely to win?

Tim Vickery of ESPN, in his recent update on the Libertadores, is very bullish on a Brazilian win because of the structural advantages that they have in terms of finance, squad depth, and organization. The data appear to back him up — this year’s Libertadores looks like a two-country race between Argentine and Brazilian representatives, with players from all over the Americas featuring in both countries. Predicting winners this far out is a mug’s game, but if I were forced, I’d tip Grêmio to repeat.

Data for the Copa Libertadores has been supplied by DataFactory LatAm, the official data supplier for CONCACAF and CONMEBOL competitions.