Argentina’s Superliga competition enters the October international break at one-third distance, with a fair number of matches pending due to weather or lack of groundskeeping.  Here is the league table after the most recent matchday: 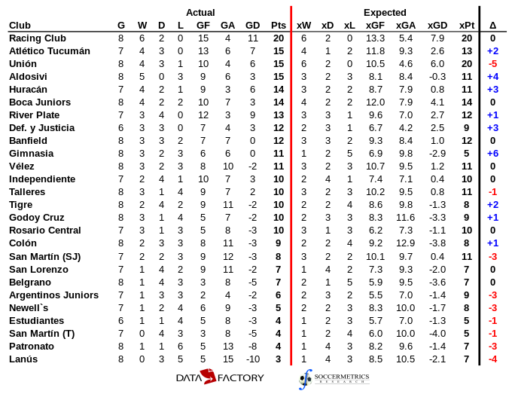 For the first time in almost two years, there is a new leader of the top flight in Argentina. Boca Juniors gave up top spot on 20 August after losing 2-0 at Estudiantes and haven’t been close to the summit since. Racing Club took over as leader and have remained there since, closely followed by Interior upstart Atlético Tucumán until recently.

By this point of the season, one would expect some talking points to establish themselves and this season is no exception. Here are the main points as I see them:

Racing and Boca will contend for the title, with a surprise outfit in between. There are several reasons why only one team has won three consecutive championships in Argentina (River’s famous side of the mid-1990s) — squad changes, the inevitable variation in performance, and the emergence of challengers. Boca Juniors have been the best team over the last two seasons, and they’ve had arguably the best collection of talent as well, but most importantly they’ve lacked a serious and consistent challenger.  In fact the sides that got the closest were smaller clubs like Banfield or rank outsiders such as Talleres and Godoy Cruz.

This season appears to be different with the emergence of Racing Club. La Academia had the best striker of last year’s competition in Lautaro Martínez, but so far they appear to have a more solid team overall, from Lisandro López and Jonatan Cristaldo up front, to Guillermo Fernández and Augusto Solari in midfield, to Gabriel Arias in goal. In previous seasons, Racing have managed to lose matches in which they have generated better chances. This season, they are winning those matches. The next two months before the Christmas/New Year’s break will determine if this recent trend is solid or an aberration.

The last two seasons have seen a surprise team emerge as a challenger, if only briefly.  (And by surprise, I mean a side outside of the traditional powers of Boca, River, Racing, Independiente, and San Lorenzo.)  There is still a long way to go, but I wonder if Unión de Santa Fe might be that surprise this season. Franco Soldano has been one of the best striker of the competition (in terms of xG) and an equal threat from open play and set pieces. The team has allowed the fewest xG per 90 minutes of the 26 Superliga teams. In fact, Unión, Boca, and Racing are in the “happy quadrant” of sides with a better than average xG generated and a better than average (lower) xGA: 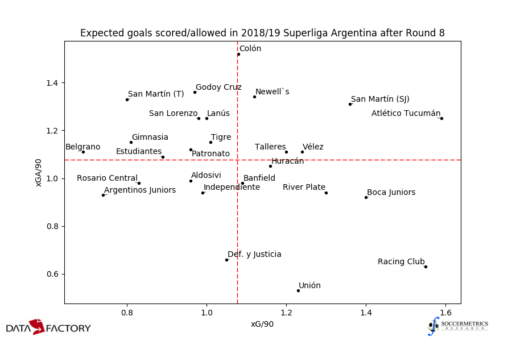 Do Unión have staying power?  We’ll have to wait and see.

River may have to choose. After a slow start to the season in which River didn’t allow any goals but couldn’t score any, they’ve roared to life with some emphatic results, none more emphatic than the 2-0 win at Boca in the Superclásico. Juan Fernando Quintero is the best midfielder in the competition so far, and Gonzalo “Pity” Martínez has been good at creating chances for others as well as for himself. River’s schedule will get crowded in the near future, with a difficult tie against holders Grêmio in the Copa Libertadores semifinals next week, a Copa Argentina semifinal against Gimnasia (La Plata), and at least one postponed Superliga match. And if River manage to win Libertadores, their schedule will become even more congested with the Club World Cup in December. River manager Marcelo Gallardo will have to rotate his squad, but at some point he and the club will have to decide which competition to prioritize.

Atlético Tucumán and Aldosivi will cool off. El Decano have had a great year — a great 18 months actually, from runner-up in the 2017 Copa Argentina, a Copa Libertadores run to the quarterfinals, and an excellent start to the Superliga campaign. They have the highest xG/90 than any other Superliga side so far, but the sixth-worst xGA/90. Atlético have overperformed both expected totals (13 goals scored vs 11.8 xG, 6 goals allowed vs 9.26 xGA), and a reversion will precipitate a drop down the table. Aldosivi, newly promoted and unbeaten, have had an even hotter start as they moved up to third before settling into fourth at the international break. Their xGA/90 is quite decent at 0.99 xGA (the league average is 1.08), but their xG/90 is anemic at 0.96 xG. They might also be due for a reversion which in their case could drop them into the relegation scrap.

San Martín (Tucumán), Belgrano, and Tigre are in big trouble. It was always going to be a rough initiation into Superliga for San Martín de Tucumán. When the only players generating more than 0.10 xG/90 are a defender and a 34-year-old striker (and a well-traveled one in Claudio Bieler), that’s a very worrying sign. Moreover, their xGA/90 is one of the worst in the Superliga. Belgrano have four players who have generated more than 0.10 xG/90 — Matías Suárez, Juan Brunetta, Adrián Camacho, and Federico Lértora — but with just three actual goals scored between them.

Of course, the most important metric are league points. San Martín de Tucumán are very short of them at the moment, and will need at least 30 points to be sure of staying up, which means that they will need positive results from at least nine of their remaining 18 matches. When I look at their fixtures, I’m not sure they can achieve four victories, much less nine.  Belgrano will be in a straight fight with Patronato and San Martín de Tucumán to escape relegation, and their anemic offense will make accumulating points very difficult, which will make staying up very difficult. Tigre haven’t been great in the back, but they aren’t terrible up front. The source of their troubles is the paltry point totals over the last two seasons, which mean that they need an above-average season to stay up. At this point of the season, they don’t look to be close to achieving that.