You are here: Home › Match Quality Metrics › Effective playing time in Argentina Primera after Round 14

It’s been a while since I’ve done this, but the likely (maybe) return of the Primera División this weekend has motivated me to run the numbers on effective playing time and major referee metrics.  First effective playing time, which was calculated for all matches played before the summer break in Argentina.  Data was supplied by DataFactory.

In contrast to the previous post, I’ve adjusted the effective time calculation to account for time lost due to balls out of play and restarted with throw-ins.  DataFactory doesn’t record the moments in which a ball leaves play except for corner kick concessions, so I have to estimate the additional time lost due to throw-in and goal kick events, which DataFactory does record.  This post gives a description of the adjustment; I used the power-law model to estimate median time lost as well as upper and lower bounds. 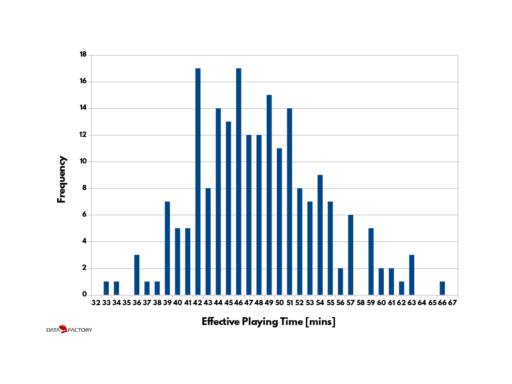 Matches with the lowest adjusted effective playing time are: