At the start of the 2013-14 European football season, I published a series of pre-season projections for over 30 league competitions that follow the European calendar (August to June).  You can read the initial post in the series but I’ll repeat the methodology again.

To make these projections we first project the goals scored and allowed by a team.  Goals scored take into account the career statistical output of the current roster of the club, with particular emphasis on projected starters.  Goals allowed take into account goalkeeper projection and historical defensive performance.  From these totals we use the Pythagorean expectation to create the expected point total.

Aaron Nielsen does a great job of compiling squad lists and projecting league statistics for every player in every league that he tracks, and I thank him for graciously allowing me to use his data in these projections.

So without any further ado, let’s compare our projections to reality:

Here is our projection: 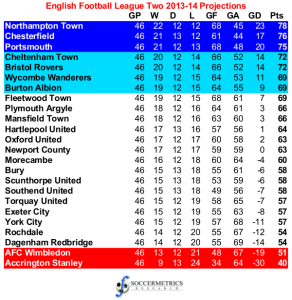 Well, at least we got Chesterfield in the promotion zone.  We projected them to have the best defense in League Two (44 goals allowed) and in the end they let in 40, which was second to Southend.  Their goalkeeper (Tommy Lee) and two defenders (Ian Evatt and Liam Cooper) were selected to the PFA League Two Team of the Year, which is indicative of their defensive achievement.  In all, four Chesterfield players received that honor.

We totally missed on Scunthorpe and Rochdale; both teams performed 15-20 goals above expectations on either side of the ball (more goals scored than expected, fewer goals allowed than expected).  Along with Chesterfield, Bury, Wimbledon and Accrington Stanley, they were the only teams who performed above expectations in scoring offense and defense.  Rochdale placed three teams in the PFA Team of the Year while Scunthorpe placed one.

Overall, the projection in League One consisted of a few good calls (Plymouth, Mansfield, Newport, Exeter City) and a lot of wild misses.  In general it’s relatively easy to correctly predict the teams that will finish mid-table, but at the end of the table it gets more difficult without prior knowledge of the sides.  We predicted Northampton to win League 2 and Rovers and Wycombe Wanderers to enter the playoffs, so for all of them to be in danger of relegation (and Rovers getting relegated out of the Football League) is amazing and sobering.  Torquay’s relegation isn’t much of a surprise, but one would expect more of an output from the 13 strikers on the squad.

Special attention needs to be paid to Portsmouth.  It’s hard to believe that this club won the FA Cup six years ago.  We predicted them to finish in the promotion places, but instead they finished the league having scored 12 goals fewer than expected, and allowed 18 goals fewer than expected.  Granted, the club’s management has been chaotic over the last few seasons to say the least, and the Supporters’ Trust has their work cut out for them.  Here’s hoping they succeed.

So statistically, the RMSE of points and league position were 13.76 points and 10.40 positions, respectively.  There were 1291 goals scored in League Two compared to 1407 predicted (-8.2% change), and the goal predictions per team had a RMSE of 12.82 (goals scored) and 11.07 (goals allowed).  We’ll see how that compares to projections in other leagues as we continue these assessments.