Last year I wrote a series of posts that sought to find out the marginal payroll costs per point earned in Major League Soccer.  This year I repeat the same analysis for the just-concluded 2012 regular season.

Below I present the marginal payroll costs of MLS teams in the 2012 season, ranked by front office efficiency gain.  The league median cost per point is $70,346.01, so marginal costs below that amount are considered positive and costs above it are negative.

Here is how the marginal payroll cost vs performance chart looks in a different way: 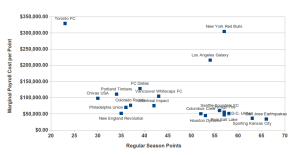 We end up seeing two groups of teams — those with very high payrolls and those whose payrolls are very similar.  Most payrolls in Major League Soccer are between $2-4 million (Vancouver and FC Dallas are a little higher, and Toronto FC, LA Galaxy, and NY Red Bulls are a lot higher), so in that group there is an inverse relationship between marginal payroll cost/point and total league points.  It’s just about impossible for the Galaxy and the Red Bulls not to be viewed as inefficient under this metric.  The team that really stands out, however, is Toronto FC, with their large payroll and very poor performance over the regular season.

I am sure that we will receive emails and phone calls from league officials protesting that (a) the salary figures from the Players Union aren’t all that accurate, and (b) this metric doesn’t take into account player availability throughout the season.  The first point is acknowledged, but true salary data is hard to get, at least openly.  The second point is a very good one, and it’s one that we hope to address in a future post.

UPDATE: In the original post, I missed an entry for Montreal Impact.  I’ve corrected the text, table, and image above.