Any match between Boca Juniors and River Plate will capture the full attention of a country and the rest of the football-watching world like no other club match with the exception of Real Madrid and Barcelona. That this match happens to be the opening match of the final of this year’s Copa Libertadores makes it historic; that it occurs at the end of the two-legged era of Libertadores finals makes it unique.

For a tie such as this one between two eternal rivals, does it even make sense to prepare an exhaustive and dispassionate analysis? Maybe it doesn’t. But I’ll try to write one anyway.

The difference-maker, in the case of Boca, has been their high level of shot conversion. The conversion rate of the Argentine Superliga champions in the 2018 Copa Libertadores has been 16.1% over the group and knockout phases, which is well above the group average of 12.0% and exceeded only by Cruzeiro and Palmeiras. No other team in the competition has scored more goals from open play than Boca.

River’s difference-maker has been their defense. A stable defensive backline has permitted River to allow 1.02 xGA/90 (0.51/0.47/0.05) and just five goals from open play, which is the fewest in the competition save for Santos (who were eliminated relatively early but the ‘keeper was brilliant), Atlético Nacional, and outgoing holders Grêmio. Boca’s defensive performance has been in line with the average performance of the knockout sides: 1.20 xGA (0.64/0.41/0.15).

River and Boca have been very strong at taking advantage of matches in which they have enjoyed the majority of scoring chances, but they have also been resilient when they have had to soak up pressure in the latter stages of the tournament. Of those matches in which they generated 0.4 xG more than their opponent, Boca have won 16 points from those seven matches (+10 GD), while River have won 14 from six (+7 GD).  Only Grêmio has won more points from that position (a perfect 21 from seven matches). Of the matches in which the difference in xG was within 0.4, River won six points from four matches, more than any other side except Palmeiras and Vasco da Gama. But of those matches in which the team generated 0.4 xG less than their opponent, Boca won six points (one win and three draws) from four matches, three of which occurred in the return legs of the knockout round. Of the other Libertadores sides that found themselves in that situation more than three times, none of them went unbeaten.

Who will take the field?

Barring known injuries and some last-minute changes, both Guillermo Barros Schelotto and Marcelo Gallardo will go with the same players that they used in the second leg of the Libertadores semifinals. The goalkeepers will stay intact, as they have for almost all of the knockout stage. Boca’s back four has experienced more changes, but during the quarterfinal and semifinal Schelotto has settled on Agustín Rossi in goal, Lucas Olaza and Leonardo Jara as the outer backs, and Lisandro Magallán and Agustín Heredia as the center backs. It is possible that Schelotto could decide to insert the more experienced Carlos Izquierdoz in place of the young Heredia for a match of this magnitude, despite the fact that Heredia has performed ably in the last two rounds. Wilmar Barrios will create the link between the defense and midfield in Schelotto’s 4-1-4-1, Nahitan Nández and possibly Pablo Pérez would occupy the center, and Cristian Pavón and Sebastián Villa would go wide. At the tip of the spear would be Ramón “Wanchope” Ábila. Darío Benedetto and Mauro Zárate will start from the bench, and one of them is likely to enter in the second half (more likely Benedetto). Edwin Cardona could see some time as a substitute as well. 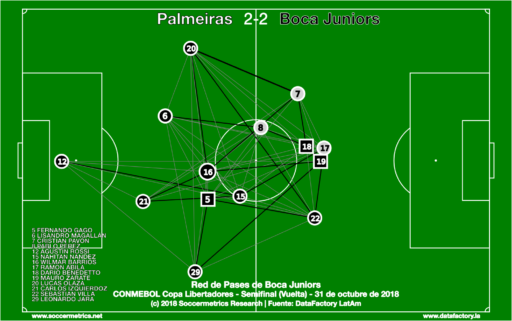 In contrast, Gallardo has been forced to make changes by injuries to his captain and holding midfielder Leonardo Ponzio and (possibly) striker Ignacio Scocco. Franco Armani remains the first-choice goalkeeper, Milton Casco and Gonzalo Montiel the wing-backs, and Jonatan Maidana and Javier Pinola the center backs. Enzo Pérez looks likely to deputize for Ponzio as Exequiel Palacios and Gonzalo Martínez occupy midfield. Up front will be Milton Santos Borré.  That brings us to ten players. 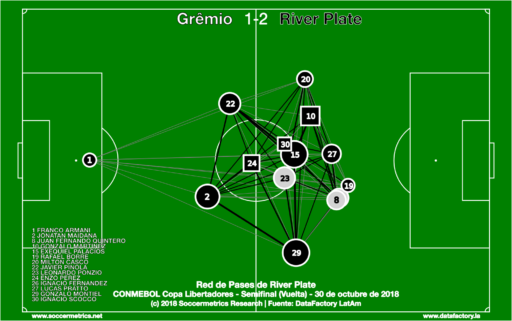 The remaining doubt is who else to play in midfield — Bruno Zuculini, Ignacio Fernández, or Juan Fernando Quintero. I have a difficult time imaging that Gallardo will insert Zuculini, who hasn’t played in the Libertadores since he played the second half in the round of 16. 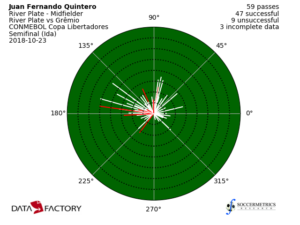 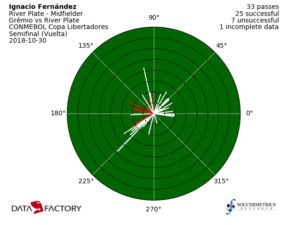 Whether to insert Fernández or Quintero depends on the overall strategy for the first leg. Quintero is more of a connector and more able to hit the long diagonal ball.  Fernández is strong and quick on the ball, good at cutting the ball back, and excellent in his defensive abilities.  He’s also great at those late runs in the box to head a cross into goal. I wouldn’t be surprised to see either player see play in either half.

Who are the key players?

It’s easy in today’s football to say that the holding midfielders will be the key players of any match, but for this one they really are. I am particularly interested in seeing how River adjust to the loss of Ponzio. In past matches Gallardo has chosen to slot Enzo Pérez into that position or drop midfielders further back, but his ball circulation will be missed greatly. If Scocco is not able to start or even appear for River, that would be a massive blow. Scocco is third on River’s squad in final third touches per 90 minutes (33.7), and leads the team — and is second in the tournament (minimum 405 minutes) — in penalty area touches per 90 (13.5). Borré, who is likely to replace Scocco up front, can create chances in the area, but he doesn’t have Scocco’s hold-up ability. Martínez and either Fernández or Quintero will be important in creating chances in the final third. Martínez was a game-changer for River in the second leg against Grêmio and they would love to see a similar performance here.

Boca’s key players in the final third will be Pavón and Ábila. Pavón is able to create chances in the attacking half, and he’s capable to overloading the central defenders. Ábila is very good at appearing at the right place in the penalty area, and the numbers show it: he is ninth in the tournament in touches in the penalty area and third overall in xG/90. Barrios will be a central figure in the engine room. But as is so often the case with Schelotto-coached teams, success will be more a product of individual talent than tactical structure.

In light of the injuries to Ponzio and Scocco, I would make Boca a slight favorite to win the match, but Superclásicos are never decided by cold logic. I expect a tense and cagey match in which River adopt a more defensive posture and attempt to frustrate Boca for long periods. If Boca break through relatively open, the match might open up, but Gallardo may be more concerned with damage limitation first and an opportunistic goal later. I think the first leg could finish 1-0 but is more likely to end 1-1. The tie will still be open when it resumes on the north side of Buenos Aires in two weeks’ time.

Data used in this post has been supplied by DataFactory Latinoamérica.