In my most recent post, I presented some technical adjustments to my Expected Saves model which resulted in much more interesting (and meaningful) results than the previous version. Last August I used the previous version of the model to evaluate goalkeeper performance in last season’s Primera División. I’m anxious to see how the findings change under the new model, so I’m revisiting them in this post.

This analysis takes DataFactory’s match event data from Primera División matches and calculates expected saves, and from those figures expected goals allowed, for every goalkeeper who participated in them.  I’ve focused on the 33 ‘keepers who appeared for more than 80000 seconds, or 1333 minutes, in league matches this season. 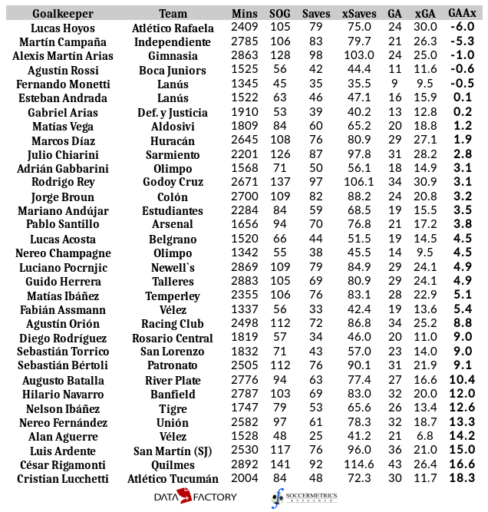 The table throws out some very interesting results. Atlético Rafaela’s primary ‘keeper Lucas Hoyos allowed 0.9 goals per 90 minutes and allowed six fewer goals than expected by an average goalkeeper — the best GAAx of any goalkeeper in the Primera División regardless of minutes played. Martín Campaña of Independiente allowed 5.3 goals below expected, which was second-best on the list.  Of the ‘keepers who played more than 2250 minutes, or the equivalent of 25 full matches, only one of them — Gimnasia de La Plata’s Alexis Martín Arias — allowed fewer goals than expected.

For the most part the best and worst goalkeepers in terms of goals allowed above expected were similar to those predicted by the previous version of the model. Agustín Rossi of champions Boca was near the top of the list, as were the two Lanús ‘keepers Fernando Monetti and Esteban Andrada. At the foot of the GAAx table were César Rigamonti of Quilmes, who was absolutely bombarded in goal, but also Cristian Lucchetti, who faced 42 fewer shots than Sarmiento’s Julio Chiarini but let in just as many goals (30 vs 31).

The following chart displays actual and expected saves and goals allowed per 90 minutes, again with own goals excepted: 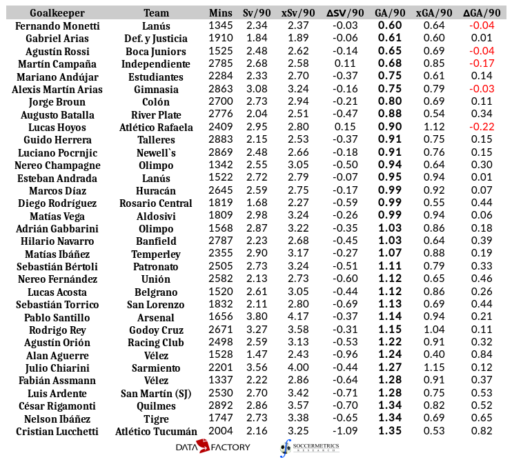 When ordered by actual goals allowed per 90 minutes, Fernando Monetti of Lanús heads the list.  He had a very good first half of the season before he tore his ACL (which might explain his performance in 2017-18). All of the goalkeepers who allowed fewer goals than expected had GA/90 below 1.0.  Augusto Batalla (River), Nereo Champagne (Olimpo), and Diego Rodríguez (Rosario Central) were the three keepers whose GA/90 fell below 1.0 and GAAx/90 exceeded 0.3.  Toward the bottom of the list you see ‘keepers such as Rigamonti, Lucchetti, Luís Ardente (San Martín de San Juan) and Nelson Ibáñez (Tigre), whose GAAx/90 exceeded 0.5.

There are other researchers who use the xG values of the shots on goal to calculate the total expected goals allowed. It would be useful to run a compare and contrast of both methodologies, especially now with an improved expected saves model. It would also be useful to visualize the shots on goal and the goalkeeper response in a similar manner to the expected goal maps in order to identify any tendencies or vulnerabilities in their performance. More tasks to do, for sure.