You are here: Home › Player Performance › Centrality at the 2018 FIFA World Cup: Kroos, Xhaka, and Son top the list

Passing network analysis has become part of the standard output in advanced soccer analytics. In this post, I show which players were most influential to their national team’s passing networks at the 2018 FIFA World Cup.

During the World Cup I posted passing networks for most matches, and almost all of the knockout phase matches. If you were following my Soccermetrics Pictures Twitter account, you saw a map like this: 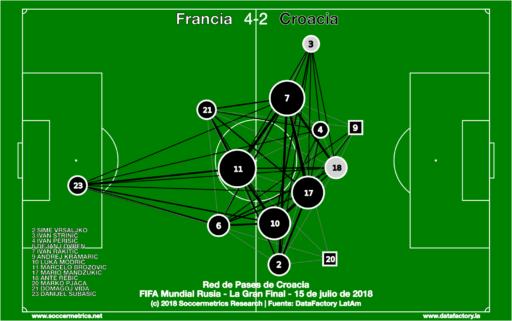 In this network, circular nodes represent the starting players, and square nodes the players substituted into the match.  Grey nodes are players substituted out.  The size of the node in proportional to the number of passing touches of the player, and the thickness of the edges between players in proportional to the total number of completed passes between them.  (If less than four passes were made between two players, that line is colored gray.) 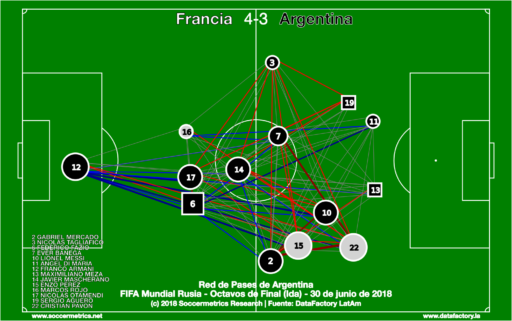 Two-way passing network of Argentina during Argentina vs France, 2018 FIFA World Cup Round of 16. Data supplied by DataFactory LatAm.

The meaning of the nodes and thicknesses are similar, but I wanted to capture the bidirectional passing between two players. Blue lines represented passes to a player “forward” in the network, while red lines represented passes “backward” in the network. Arrows would have conveyed the concept more clearly, but it was difficult to find a solution that didn’t add clutter, and in the end the map just confused viewers, so I dropped it in favor of the first network map.

Passing network maps are interesting to look at, but I wanted to extract some quantitative information from them, such as the idea of player centrality or influence. I’ve considered the idea of eigenvector centrality in an analysis of domestic competitions in Argentina’s Superliga, which identifies which players are most important to their team’s passing networks.  The post that I’ve linked goes into detail about the calculation of eigenvector centrality, so if you’re interested in that follow the link.

The chart below shows the three players with the highest eigenvector centrality values for their respective national teams during the 2018 FIFA World Cup. I only consider players who appeared for half of their team’s matches in their designated position. 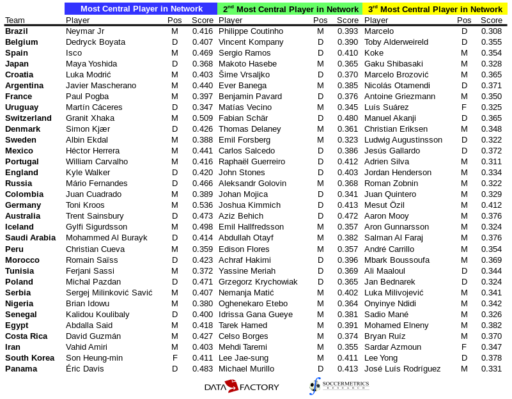 As I’ve warned before, the most central players are not necessarily the best players for their team, but they are the ones who had the most influence in the passing network. But it is interesting to see the overlaps between those two categories. Neymar and Coutinho appear as most influential for Brazil’s passing networks, as do Pogba and Griezmann for France.

Most of the players who were most influential are deep-lying players such as center backs or holding midfielders, but you also see more advanced midfielders who are central to the network. One example is Luka Modrić for Croatia or Juan Quintero for Colombia. There are also midfielders who have striking capability, such as Griezmann, Neymar, and Bryan Ruíz of Costa Rica.

It’s rare to see out-and-out forwards as central to the passing network. They are at the tip of the spear, so to speak, and are more in the business of receiving passes and shooting on target than circulating the ball. Only three forwards appear in the top three for their teams: Luís Suárez of Uruguay, Sardar Azmoun of Iran, and Son Heung-min of South Korea. Son Heung-min stands out for having the most influence on his side, which makes sense because it appeared that South Korea’s gameplan was to get the ball to Son and see what he does with it.

Who are the players with the most influence on their passing networks? Those would be Toni Kroos and Granit Xhaka of Germany and Switzerland, respectively.  The performance of their teams is beside the point; they had a degree of importance not seen in any other side (Sigurdsson for Iceland comes close).

I’ll post the data for all players in all 32 teams on my Project Data repository on GitHub.