You are here: Home › League Competitions › Assessing the Projections: 2014-15 Eredivisie

Another European season is drawing to a close, and it’s time to take a look back at preseason projections that were made.  In contrast to the 30+ league projections last season, there were only two made this time: the Dutch Eredivisie and the English Premier League.  The Eredivisie concluded last Sunday, so this post will focus on that projection.

For those who haven’t followed these projections, a little background.  The projected league tables are a Pythagorean expectation of the projected goal statistics published by Aaron Nielsen at the beginning of the season (and tweaked after the summer transfer window closes).  I’ve written in the past that the Pythagorean is not a predictor per se, but an assessor of performance relative to some statistical expectation.  If the goal statistics fed into it are forecasted totals, however, it might be possible to view it as a predictor.  The projection is more for my edification on how hard it is to predict the future, and your amusement on how far off these projections can be.

So without further ado, here is the projected preseason table for the 2014-15 Eredivisie: 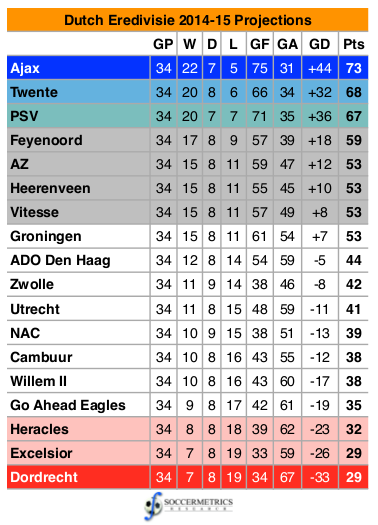 Here is the projected table after the summer transfer window closed (and there were some significant changes in the squads of the major teams):

Our projection was for a tight race between PSV and Ajax with Twente falling close behind.  The original projection had Twente finishing second, but we felt that the transfers significantly helped PSV and crippled Twente.  In light of Twente’s financial problems, those transfers were very necessary, but on paper they had a squad at the beginning of the season that should have finished higher in the table.  It illustrates a vulnerability of preseason projections — teams can and do change, sometimes by no fault of their own, other times by selling off key elements of the side.

The effect of the revised projection was to tighten up the RMSE of the expected league table and increase the number of teams predicted to within one place in the table.  (To be fair, four teams matched their final placing in the original projected league table.) When you’re talking about big misses, the big overachievers were sides such as Vitesse, Zwolle (the Dutch Cup runners-up), Willem II, Heracles, and even champions PSV.  All of these teams ran well ahead of projected goal offense or defense — some allowed ten or more fewer goals than expected, but none of them allowed more.  In the case of PSV, they scored sixteen goals more than expected and won 18 more points than expected, which turned the competition into an early decision and a blowout finish.  The big misses in the other direction were sides such as Den Haag, NAC Breda, and poor Twente.  Much has been said about Twente’s plight, and this is a side that suffered losses up and down their squad, but in particular on their defense.  Breda’s defense was much worse than expected, and Den Haag couldn’t score at all.  I was impressed to get Feyenoord’s record on the nose (even right on with the projected goal statistics!), but it’s probably dumb luck.

This table confirms some things and reveals others.  First, it confirms PSV’s advantage over the rest of the field while revealing their significant overperformance relative to their statistical expectation.  Next, it reveals the overachievement of AZ in nipping past Feyenoord, Vitesse, Zwolle, and Heerenveen to an automatic Europa League spot.  Most of the teams fell within the RMSE of the Pythagorean expectation (4.528), so even if some teams performed significantly better or worse than a human expectation, they actually performed in line with their statistical expectations.  The exceptions were the aforementioned PSV and AZ as well as Utrecht and Excelsior.  Twente’s underperformance is deceiving because of its six-point administrative deduction; if you only consider their performance on the field, they might have done well enough to have a chance at the Europa League playoff.  It just goes to show just how damaging their institutional disarray and the KNVB’s punishment were.

Here’s a statistical summary of the two projections (and I’ll change this to a table later):