You are here: Home › Football Business Analytics › How many players on MLS payrolls appear in league matches? The curious cases of 2011 and 2012

I’ve spent much of the last year studying draft and payroll data in Major League Soccer, from the founding days in 1996 to the present.  I’m starting to get a picture of who plays and who doesn’t as well as the values attached to draft selections by future performance and the market.  The second part is really intriguing and is the subject of my CASSIS talk, but a look at some aggregates is no less interesting.

In this post, I’ll focus on the Designated Player era (2007-present) as payroll data are more easily obtainable, but this study can apply to the entire history of the league.

Over the Designated Player era, a high percentage of players on the books of the MLS teams actually play in league matches in a given season. (Figure below.)  There is some oscillation of course, but the rate stays within the 80-85% range.  Two years stand out, however — the 2011 and 2012 seasons.  In the 2011 season, 73% of the players on MLS team payrolls appeared in a league match.  The 2012 season saw even fewer players — just 65% of players on the payroll saw time in a league match.  Now, these players may have appeared in Open Cup matches, or Champions League matches, or in a lower league like NASL or USL.  But in a similar environment, other seasons see a higher participation rate.  What’s going on? 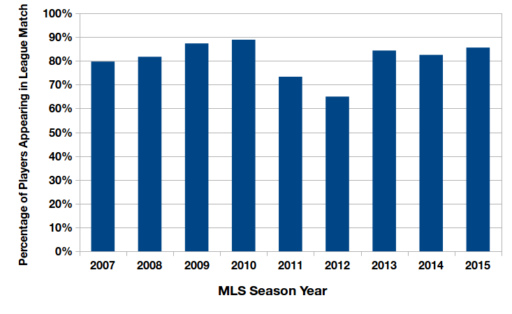 The large majority of those players who don’t participate in a league season enter the league that same year.  The second plot displayed below shows the acquisition paths by which a player entered the league — as a Designated Player, as a Developmental Player, via the drafts, or other means. 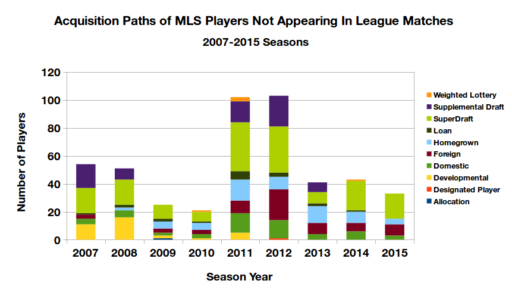 There are two large peaks for the 2011 and 2012 seasons which represent over 100 contracted players who did not appear in a league match.  A large plurality of those players were drafted players (SuperDraft or Supplemental Draft), but there are larger cohorts of loaned, homegrown, and domestic/foreign signings who didn’t play either.

There are a couple of events that might explain the glut of unused players.  In 2011 and 2012, three new teams were added to the league in Portland, Vancouver, and Montreal.  In the 2011 season, the Reserve Division returned to MLS and rosters were expanded to 30 players, as well as provisions for more off-budget and below-minimum roster slots.

It does appear that more players were acquired across all of the available acquisition paths during those two seasons, but for whatever reason, a large proportion was left unused that season.  This doesn’t mean that those players weren’t used at all, but new players who don’t appear their first season in MLS find it very difficult to appear in future seasons.

More analysis is coming on this site, and in Vancouver in September.