You are here: Home › survival analysis 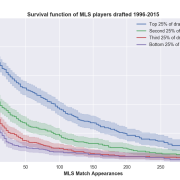 Major League Soccer has employed a series of drafts that distributed players who have signed with the league among its member clubs.  There are drafts for college players (mostly), for players who have left the league and come back, and for in-league players left unprotected for an expansion draft.  In this post, I focus on […]